After his bride, Shibani Dandekar blessed the fans with some stunning pictures from their wedding ceremony, the ecstatic groom Farhan Akhtar took to his social media handle to share some beautiful pictures from the same. The pictures shared by the actor-director prove that the wedding ceremony was a wholesome family affair. Farhan and Shibani entered marital bliss on February 19, 2022, in Khandala.

Talking about the same, Farhan Akhtar shared pictures of him posing with his groomsmen. The Dil Chahta Hai director can be seen posing with his in-laws Shashidhar and Sulabha Dandekar. In one of the pictures, one can spot his father Javed Akhtar and Shabana Azmi along with his sister Zoya Akhtar and close friend and producer Ritesh Sidhwani. The bride's sister Anushka Dandekar in a lovely Manish Malhotra floral-printed Lehenga can also be seen in the picture. 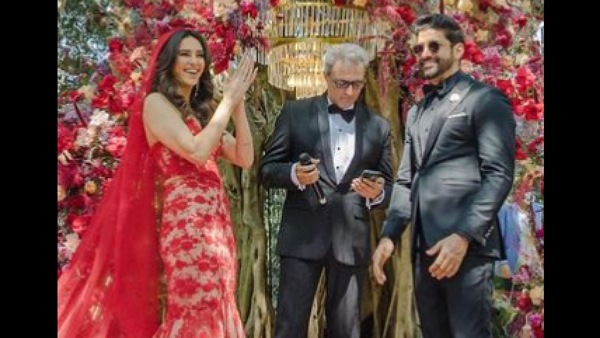 Farhan Akhtar then shared some candid shots of him and Shibani Dandekar along with their guests and family grooving on the dance floor. The highlight of the same was the Luck By Chance actor dancing with Hrithik Roshan to the song 'Senorita' from their iconic film Zindagi Na Milegi Dobara. Lastly, the actor shared a delightful group picture which also had his mother, Honey Irani and director Farah Khan. Take a look at the post.

Farhan Akhtar captioned the same stating, "Sun. Smiles. Steps." Some of the fans in the comment section were quick to point out that the Toofaan actor's wedding was giving major vibes to the song 'Sooraj Ki Baahon Main' from Zindagi Na Milegi Dobara. One netizen wrote, "Me getting proper "Suraj Ki Baahon Mein" vibes from this" while another stated, "Actually, this has a very 'Sooraj Ki Baahon Mein' feel. You thought of it so many years ago." 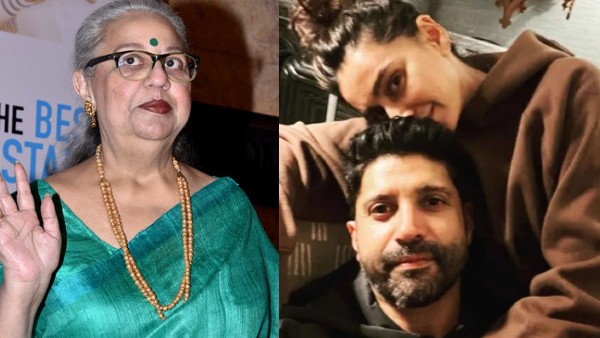 Farhan Akhtar's Mom On Her Equation With Shibani Dandekar: We Keep Messaging Each Other, She's Just Too Sweet

He also shared another set of pictures which showed some beautiful moments from the wedding. In one picture Shibani can be seen dancinig with Javed Akhtar while another one showed Shabana Azmi and the bride's father having a sweet dance. The post also has pics of the girl squad lifting the groom and a candid snap where Farah Khan, the groom, Hrithik Roshan and Shabana Azmi can be seen in the middle of a dance step. Farhan captioned the post as, "Friends. Family. Fun times."

Talking about the newlyweds' wedding attire, Farhan Akhtar looks handsome in a black tuxedo and pants that he had paired up with matching shoes and a bowtie along with glares. Shibani Dandekar on the other hand looks beautiful in a red sheer gown which she has paired up with a trailing red veil that is a complete show-stealer. The others who were in attendance in the ceremony included Shankar Mahadevan, Ashutosh Rana, Rhea Chakraborty, Amrita Arora and others.