Like every year, the year 2012 has been a mixed year for Kannada film industry. The Sandalwood has seen many ups and downs in the year. However, the number of movies made in the industry has come down so as the remakes.

Sandalwood stars have tried to do different kind of roles and attempted experimental characters. Be it Darshan's historical role of Sangolli Rayanna in Krantiveera Sangolli Rayanna or Vijay's realistic role of Chandappa in Bheema Theeradalli, the audience welcomed the change and appreciated the efforts. 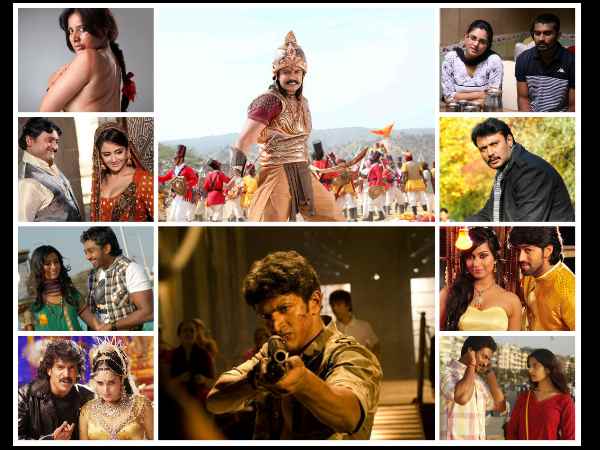 However, Kiccha Sudeep did not have a single release in the year but his Telugu film Eega became a big hit in entire South India. Now, let us see who is the best actor of 2012. Audience can choose the best actor by voting for the actor. Follow the slideshow to see the list and the poll is in the last slide.

Darshan tried to live up to the expectations of his other name - Challenging Star - by taking up the role of Sangolli Rayanna in Krantiveera Sangolli Rayanna. Though the way he showed his anguish in every frame was not appreciated by people, his personality and acting won thumbs up.

Dhruv Sarja is the new star born in 2012. The nephew of Arjun Sarja and brother of Chiru Sarja stuck gold in Addhuri. His dancing abilities and acting skills were praised.

Puneet Rajkumar came out with a good performance in Suri's Anna Bond. Though the film received mixed reviews, his acting was appreciated.

Yash has finally got what he was waiting for in Drama. Well, the actor, who has not worked with a top director, gave his best in the Yogaraj Bhat directorial film. His chemistry with Radhika Pandit also worked big time.

Shivaraj Kumar was let down by Om Prakash Rao in Shiva but the actor's avatars in the film was very stylish and Shivanna came out with flying colours in acting and action departments.

Vijay's role in Bheema Theeradalli proved again that he would act well if given a good script. The actor worked hard to learn North Karnataka dialect and it was visible in the movie. Is there is any need to talk about his stunt sequences?

Upendra was seen in four different roles in his four releases - Aarakshaka, Katari Veera Surasundarangi, Godfather and Kalpana. However, it is his role of a men with feminine qualities that impressed audience.

Aditya did a wonderful job in Edegarike. He tasted success with the realistic subject again. The film was directed by Sumana Kittur.

Yogish's performance in Sidlingu was natural and won praises from media and audience. The film also starred Ramya.

Komal Kumar, after being in the industry for so many years, tasted his first success as a hero in Govindaya Namaha.