Taanakkaran, the highly anticipated Vikram Prabhu-starrer has finally premiered on Disney+ Hotstar. The movie, which is directed by Tamizh, revolves around a police recruit school and how the unforgiving system treats its new entrants. Taanakkaran, which is scripted by director Tamizh himself, is reportedly based on real-life incidents that happened in 1997.

Is the Vikram Prabhu-starrer worth watching? Read Taanakkaran movie review here to know...

Arivazhagan aka Arivu (Vikram Prabhu) aspires to become a police officer and successfully joins the Police Recruits School (PRS). However, he soon realises that everything is not as easy as he expected. The training school is controlled by Inspector Muthupandi (Madhusudhan Rao), and his valet Eeshwaramurthy (Lal), who torture the new entrants in the name of parade training. When Arivu stands up against injustice, all hell breaks loose. 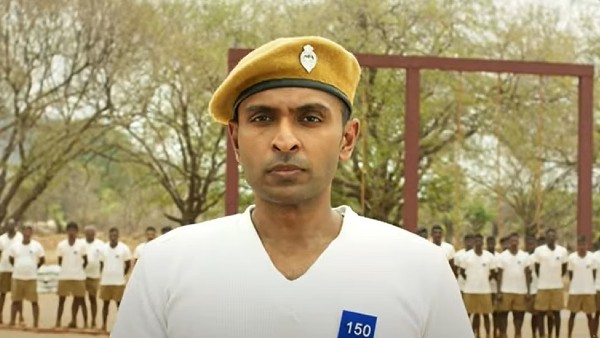 Taanakkaran OTT Release Date And Time On Disney+ Hotstar; Here's Everything You Need To Know!

Tamizh, the writer-director has successfully created a hard-hitting drama that explores the unforgiving police system established by the British, in Taanakkaran. The police training camp and its functioning is narrated in the most convincing and realistic manner, which makes the film appealing. The emotions of the recruits who find it extremely hard to adjust to the hell-like atmosphere of PRS are told effectively.

However, Taanakkaran loses its grip after a point, owing to the repetitive scenes of abuse and torture. The writer-filmmaker has definitely overdone when it comes to narrating the plight of police recruits, thus making the film a tiring watch after a point. The excessive melodrama added to literally every minute of its run time plays a major spoilsport. Also, the romantic track adds nothing to the main plot and looks completely unnecessary.

Vikram Prabhu has delivered the finest performance of his career so far, as the ambitious police recruit Arivu. Lal once again proves his mettle as an actor in the role of Eeshwaramurthy and creates a deep impact with his menacing screen presence. The rest of the star cast, including Madhusudhan Rao, MS Bhaskar, Anjali Nair, Bose Venkat, and others are good at their respective roles.

Madhesh Manickam, the director of photography has done a phenomenal job with the visualisation of the project. Philomin Raj's editing has made Taanakkaran a crisp watch.

Ghibran, the music composer scores with a highly effective original score that creates the perfect ambience for the police story set in a different time period.

Taanakkaran is a powerful, hard-hitting film that depicts the unforgiving police system that was set up by the British. The exceptional performances make it an appealing watch, despite its flaws.