Karisma Kapoor and Jaya Bachchan recently came together under one roof; courtesy Nikhil Nanda's birthday bash at his residence in Delhi on March 18. For those unversed, Nikhil Nanda is Karisma Kapoor's cousin and husband of Jaya Bachchan's daughter Shweta Bachchan Nanda. Going by the glimpses shared on Karisma and Riddhima's respective Instagram handles, the party was a strictly family affair.

In one of the 'fam-jam' pictures shared by Riddhima from Nikhil Nanda's birthday eve, we see Jaya Bachchan posing for a picture with Riddhima Kapoor Sahni, Nikhil Nanda, Nitasha Nanda and Karisma Kapoor. Another photo features Karisma going all pouty for a picture with her cousin Riddhima. The latter's daughter Samara was also a part of the celebration.

The Raja Hindustani actress recently celebrated her daughter Samaira's 18th birthday with an intimate celebration at home. Later, she took to her Instagram page to pen an endearing birthday wish for her daughter that read, "You will always be my little princess 💕 Happy 16th birthday 💖
#mybabygirl #happybirthday." Workwise, Karisma was last seen in ALT Balaji's web series Mentalhood.

Speaking about Jaya Bachchan, there are reports that the veteran actress is all set to make her debut in Marathi cinema with Gajendra Ahire's next. When the filmmaker was asked about the same, he told ETimes, "We are at a very initial stage. I am surprised that the news came out. Yes Jaya ji was on my mind and so I did approach her. However, I am waiting for her revert, which I should get within a week. Ab Jayaji maanengi ya nahi maanengi yeh mujhe nahi malum. I am just keeping my fingers crossed." 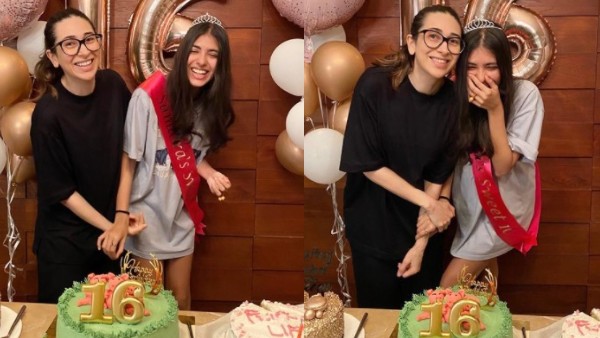