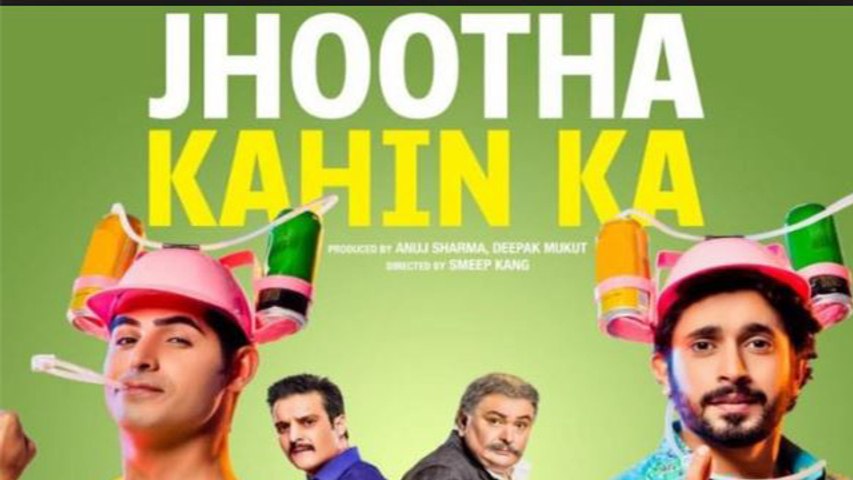 In one of the scenes which is supposed to be a hilarous one, Rajesh Sharma asks Rishi Kapoor, 'Didi ki muskaan achhi nahi lagi aapko kabhi?' To which, the latter replies, 'Jahan inke dimple padte hai na, teri didi ke wahan pimple rehte the.' Well, 'Jhoota Kahin Ka' has many such bland liners which are served to you in the name of comedy.

Jumping straight into the plot, the film opens in Punjab where we are introduced to Yograj Singh (Rishi Kapoor) who wants his Mauritius-returned son Varun (Omkar Kapoor) to join their family profession. However, the young lad is least interested and flies back to Mauritius to join his close buddy Karan (Sunny Singh) in hunt of a job.

There, he bumps into a girl Riya (Nimisha Mehta) at a wedding. Few scenes and a song later, the two end up tying the knot. Having lied to Riya's family that he doesn't have a family of his own, he moves in with them (Manoj Joshi and Lilette Dubey).

On the other hand, Karan is constantly heckled by his girlfriend Sonam (Rucha Vaidya) to get married, but the boy is waiting to get a go-ahead from his brother Tommy (Jimmy Sheirgill) who is in the prison.

Karan and Varun are forced to swap identities when Yograj Singh decides to move to Mauritius to be close to his son and ends up renting the bungalow next door which is owned by Varun's in-laws. The rest of the plot revolves around how the two boys end up getting caught in the web of their own lies.

'Jhooth Kahin Ka' is a remake of director Smeep Kang's own Punjabi hit, 'Carry On Jatta'. But when it comes to his latest offering, he falls flat in holding your attention for over two hours. The screenplay is bland. The jokes get repetitive after a point and the romance too becomes stale. Random songs are inserted at places which merely adds to the screen-time.

It feels good to see Rishi Kapoor at his energetic best and honestly, he is the reason why we keep ourselves invested in Jhootha Kahin Ka. Sunny Singh still has the hangover of the 'Punchnama' series. Meanwhile, Omkar Kapoor goes a little hard on his expressions. The girls, Nimisha Mehta and Rucha Vaidya have very little scope to perform. Jimmy Sheirgill ends up with well, one more 'criminal' act.

Manoj Joshi hams too much, but still manages to evoke some laughs. Smeep Kang tries to add some humor by character-shaming Lilette Dubey's role. So not cool! Himanshu Sharma acts his part well.

Akashdeep Pandey's cinematography falters when it comes to capturing the beauty of Mauritius. Ashfaque Makrani's editing is chopping and the music scores low. The background score is annoying.

Smeep Kang's comedy of errors lack the comic punches to make you go haha all the way. Watch 'Jhootha Kahin Ka' only if loud humour appeals to your taste. The rest can easily give this one a miss. I am going with 2 stars.