The Oscars 2020 was held at the Dolby Theatre in Hollywood, Los Angeles, USA, on February 10. Here are the live updates and the best and the worst moments of the night. READ: Oscars 2020 Full Winners List: Parasite Creates History With Best Picture, 3 Other Wins!

9:58 am The entire cast of Parasite finally got to come on stage to accept the first international film to ever receive the Best Picture Award. While organizers managed not to cut through any speeches throughout the event, they turned off the light after the best picture win.

With the crowd asked to turn the lights back on, the producers continued on the speech with a special thanks for director Bong Joon Ho.

9:50 am Rami Malek announced the Best Female Lead Actor Winner as Renee Zellweger (Judy). Renee thanks her fellow nominees, and essentially everyone she ever met.

Joaquin Phoenix has A LOT to say. It’s not always eloquent, but I think he’s on the side of good.

“Run to the rescue and Peace will follow“ #Oscars #Oscars2020pic.twitter.com/LbSJpMv1Ew

9:40 am Without keeping everyone away from the bar much longer, Olivia Colman announces the Best Male Lead Actor Winner- Joaquin Phoenix (Joker). Talking about human's egoistic worldview, Joaquin encourages everyone to help, support and grow to with nature, not against it.

9:30 am For the Memoriam segment, introduced by Steven Spielberg. Billie Eilish sings Yesterday.

9:27 am With the second Oscar for the night and third nomination Bong Joon Ho heads to the stage and accepts the Best Director Award for Parasite. He was just as shocked, as the viewers, since he was sure the international feature was his last win for the night. He quoted Martin Scorsese and said it was a huge honour and talked about splitting the trophy in five for all nominees.

He also promises to drink till morning, again.

9:17 am Best Orginal Song Winner- I'm Gonna Love Me Again, Music by Elton John, Lyric by Bernie Taupin (Rocketman). We already heard Elton perform earlier, he thanks his team, fellow nominees and the fact that this was the first nomination and win for Bernie.

9:10 am After Taika Waititi talked about the honorary awards, he introduced Sigourney Weaver, Gal Gadot and Brie Larson to the stage. They announce a fight club commencement, where the loser gets to answer all press question about 'how it is being a woman in Hollywood'. They also say 'All women are superheroes', and introduce the first female conductor for Best Original Score category.

Winner- Hildur Guðnadóttir (Joker), this is her first Oscar but she has been winning every award for the category in the award season. She urges all women with music in their hearts to speak up, 'we need to hear your voices'

9:00 am Penelope Cruz in a stunning black gown announced the Best International Feature win and to nobody's surprise, Parasite team took to the stage for the award. Bong Joon-ho ended the acceptance speech with 'I am ready to drink tonight,' which got a crazy applause from the crowd. The director already knows this is the last win for the film, tonight.

8:50 am Rebel Willson and James Gorden took to the stage in their Cats' outfit and took a diss at the importance of visual effects while announcing the nominations for Best Visual Effects. We also got to see them play with the on-stage mic as a couple of cats.

8:40 am Cynthia Erivo just performed the Oscar nomination for Best Original Song titled, Stand Up. It is not just the best performance of the night but also a strong contender for the award. Meanwhile here is a video of Kelly singing along Eminem, Twitter is still going on about the biggest surprise of the night.

Kelly Marie Tran rapping along to Eminem's "Lose Yourself" at the #Oscars #Oscars2020 pic.twitter.com/fZmWYsqEkX

8:30 am Best Cinematographer Winner- Roger Deakins (1917), during the acceptance speech he thanked his wife, the entire crew, and mentioned that he is a great cook, thanks to Will Ferell and Julia Louis-Dreyfus's explanation of who cinematographers are.

8:10 am Sound Editing Win goes to Ford Vs Ferrari, while Sound Mixing Academy Award goes to 1917, which is the first award for both the best picture contender for Oscars.

8:05 am Eminem's surprise performance led to a crowd of awkwardly bobbing heads, and a standing ovation long enough to cue music again.

Eminem is performing at the Oscars.

8:00 am Anthony Ramos's first time at the Oscars and he comes to introduce his idol, Lin Manuel Miranda, who then to commemorate songs introduces a long mashup of the best songs ever. And the list also included A R Rahman's Jai Ho, Titanic's Heart Goes On, followed by Eminem taking to the stage in all black including a beard.

Eminem takes the stage with a beard and starts busting rhymes! No, seriously. #Oscars2020 pic.twitter.com/gUZSyZKAXA

7: 50 am Mahershala Ali, took to the stage to announce the Best Supporting Actress Award for Laura Dern's performance in Marriage Story. She accepted the award on her birthday and thanked her parents for the best childhood. It is also Laura's first-ever Oscar and her third nomination in any category.

7: 45 am Mark Ruffalo announced The Best Documentary Feature- Steven Bognar, Julia Reichert and Jeff Reichert (American Factory) "This will get better when the workers unite'- Julia Reichert. This year Oscars has a common theme of trying to empower the communities that haven't been talked about.

Another winner for the night is, Best Documentary Short- Learning to Skateboard in a Warzone (If You're a Girl) Carol Dysinger and Elena Andreicheva.

7: 40 am Chrissy Metz took to the stage in an all-black ensemble singing the Oscar-nominated song, I'm Standing With You, which may not win the best song, which will instead go to Elton John's creation.

7: 31 am Maya Rudolph and Kristen Wiig managed to win an entire melody about clothes within a minute and announced the Costume Design Winner- Jacqueline Durran (Little Women). Other than you and me someone else was also not feeling the duet on costumes.

7: 30 am Production Design- Barbara Ling And Nancy Haigh (Once Upon A Time Hollywood), the speech was a special thanks to everyone in the crew and onset.

7: 20 am Live Action Short Film- Marshall Curry (The Neighbours' Widow), dedicated his first Academy win to his mother who is the best storyteller according to the filmmaker. He ended his speech with a shout out to all storytellers.

7:18 am Shia LaBeouf with this The Peanut Butter Falcon co-star Zack Gottsagen arrived at the stage. It was really interesting to watch Shia La patiently waiting for Zack to speak and help him through. The entire theatre remained quiet and clam. The wins, the monologues and performances have been fresh this year.

7: 15 am Adapted Screenplay Winner - Taika Waititi (Jojo Rabbit), it is the first Oscar win and the three nominations for the actor, director and writer.

7:10 am Original Screenplay Winner - Parasite (Bong Joon-ho and Han Jin-won), the acceptance speech was a quick thank you in Korean and English with a translator.

7:08 am Frozen 2's Into The Unknown is performed by every singer for the different languages including English by Idina Menzel and in Japanese, Polish, Thai, Castilian, German, Norwegian, Russian, Spanish and Danish.

7:00 am Best Animation Feature Winner- Toy Story 4 while Hair Love wins the best animated short. There was alot of talk about how the Oscars will work without a host, but this time we will be having a different celebrity introducing the presenters and performers each time with a monologue.

6:40 am Supporting Role Winner - Brad Pitt announced by Regina King. It is the second Oscars for Brad, and he commented on politics during his 45 seconds of an acceptance speech and need for recognition for stunt performers.

6:30 am The Oscars 2020 started with a rendition of A Beautiful Day In The Neighbourhood ending with a tribute to all the talent and women in the house. The performance by Janelle Monae was a surprise start to the ceremony.

The #Oscars2020 just got off to an incredible start – a thrilling performance by Janelle Monae singing an Oscar-ified version of her hit Come Alive (War Of The Roses). Here she is as Mr. Rogers and Midsommar's May Queen. pic.twitter.com/G7cIRVmqS3

6:20 am The Dolby Theatre is filling up and Oscars 2020 ceremony will go live soon.

6:11 am Brie Larson who is presenting for the Oscars 2020, arrived in a rose gold dress with an attached cape. Brad Pitt and Leonardo DiCaprio were seen in black three pieces, Brad is sure to win the best-supporting actor in male for his performance in Once Upon A Time In Hollywood.

6:00 am Little Women, Saoirse Ronan and Florence Pugh arrived at the red carpet, while Ronan who is nominated for Best actress debuted her blonde bangs with a beautiful purple and golde gown. While Pugh who is nominated for Supporting actress was seen in an ocean green dress.

5:50 am Natalie Portman walked down the red carpet in a black Dior cape and a gold dress. The cape is actually embroidered with the names of female directors who weren't nominated for Oscars 2020, including Scafaria, Wang, Gerwig, Diop, Heller, Matsoukas, Ha'rel, Sciamma.

Natalie Portman embroidered her Dior cape with all of the female directors who weren't nominated for #Oscars. Check out her explanation here. pic.twitter.com/kyyo2wVMZf

5:05 am Laura Darn walks the red carpet with her family, in a pink gown embellished with black gems. The dress said to be inspired by lampshades has the actress ready to accept the Academy Award for Best Supporting Actress.

The 92nd Academy Awards honoured some of the the biggest names and films of the year, the red carpet saw big faces like Charlize Theron, Brad Pitt, Cynthia Erivo, Leonardo DiCaprio and Scarlett Johansson and many more. 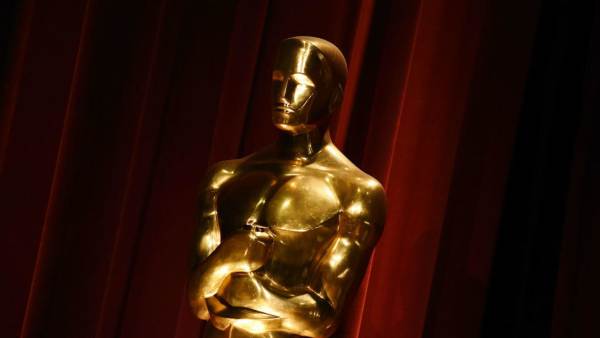 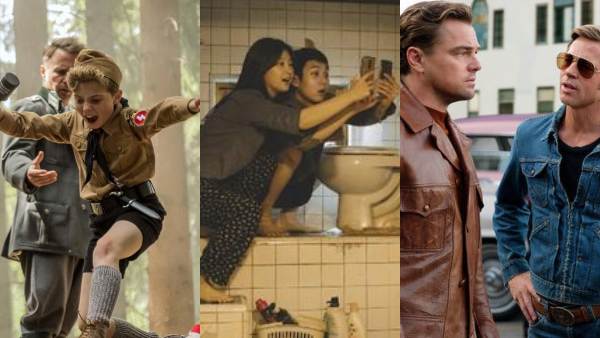