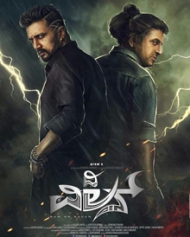 The villain movie is a romantic action entertainer written and directed by Prem and produced by C R Manohar while Arjun Janya scored music for this movie.

For the first time Shiva Rajkumar and Sudeep are acting togather in this movie.

On the outset, it is the battle between Rama & Raavana which poses to be a combat of good vs evil. However, a perfect conclusion can never be drawn that Raavana is an evil force as mythology doesn’t convincingly approve of the same and so does The Villain.

The movie emphasizes the fact that despite Raavana being a person with a negative shade, he had his own share of positive asuspects of a good person which cannot be brushed aside. There is mother sentiment, a small hero-heroine episode and a bunch of songs which a general commercial cinema would consist of.