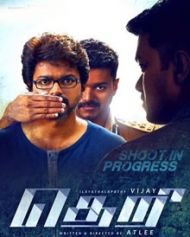 Theri (Vijay's Theri) is a Tamil action film written and directed by Atlee and produced by Kalaipuli S. Thanu. The film features Vijay, Samantha and Amy Jackson in the lead roles, while Prabhu and Raadhika Sarathkumar amongst others form an ensemble cast.
Theri Story
Theri is an action film that has a message for society. The film tries to stress on the importance of raising our children well and making them responsible citizens of the country. And safety of women is stressed. It is loaded with emotions and action sequences to satisfy all sorts of viewers.
Vijay plays Joseph Kuruvilla, Vijay Kumar and Dharmeshwar in Theri. One of these characters is a cop. Samantha plays his wife Mithra, a doctor by profession. Interestingly the tough cop sees an opposition in the form of an influential man (Mahendran) in the area. His son does a bad act and that lets loose repercussions. There throws a challenge to Vijay by Mahendran.
Amy Jackson plays a Malayalee teacher who shares a good bonding with Vijay’s daughter Nainika. And the Raadhika Sarathkumar as Vijay’s mother steals the show. Mottai Rajendran is a rock star. A cat and mouse game between Mahendran and Vijay, Theri is stylish and suave.
VIEW: Interesting Photos Of Ilayathapathy Vijay From THERI
Theri Production
The film began production in Chennai during early July 2015 and an introductory song for Vijay was shot in the city, followed by scenes featuring the actor and Samantha on the East Coast Road.
Hollywood action choreographer Kaloyan Vodenicharov worked with the team in early December 2015 to help shoot the climax portions for the film. Poor climatic conditions in China meant that the team had to abandon their idea of filming sequences there and instead opted to shoot in Bangkok.
Click here to get updates on Vijay's #Thalapathy60
Sets were erected in a factory in Chennai to shoot the climax scenes, with stunt choreographer Kaloyan Vodenicharov recruited to help train artistes and film the sequences during December 2015.
The principal shooting of Tamil actor Vijay-starrer Theri has been wrapped up on Jan 17th 2016 and the film is gearing up for a grand summer release.
Music
Theri is an special movie for GV Prakash, as it will be the 50th film of his career. G. V. Prakash Kumar collaborated with Atlee after the success of their previous album, Raja Rani (2013). Theri was the fiftieth film that Prakash had signed, and with Atlee, he went to Goa in March 2015 for a music composing session.
Uthara Unnikrishnan and Deva recorded songs for the film, while Vijay and Neeti Mohan also recorded a song for the film.
Rate Your Favourite Songs From THERI
Click here to listen to all the songs from Theri