Reviews
Rating:
3.0/5
Remaking classics will be a painful task as it rides on huge-burden of expectations from audience. Minor errors will also be noticed by people and they don't leave any opportunity to come hard on the makers of the film. So, making justice to such products and satisfying audience are the difficult parts of remaking hit movies.

Now, Thillu Mullu, a blockbuster starring Rajinikanth and Madhavi, has been remade. The original version was directed by legendary K Balachander and it had established stars playing the lead roles. But the latest instalment is made by budding stars. The movie is the remake of Bollywood hit movie Golmal starring Amol Palekar.

Shiva and Isha Talwar starring Thillu Mullu is directed by Badri. The director has finely tuned the script to suit the new-age audience. Has the team done justice to the original? Find it in the review...

To begin with Badri, he has made sea changes in the script. So, those who think that the 2013 Thillu Mullu would be a carbon copy of superstar Rajinikanth's movie, the Shiva starrer movie would surprise. Well, the core story is the same, but the screenplay makes huge difference.

Pasupathi's (Shiva) life is not going great with him losing his father's property in a legal battle. Now, he is in search of a better job to lead the normal life. He also has the responsibility of his sister's marriage. Upon hearing his uncle's advice, he decides to get a job in a leading water brand owned by Siva Gurunathan (Prakash Raj). 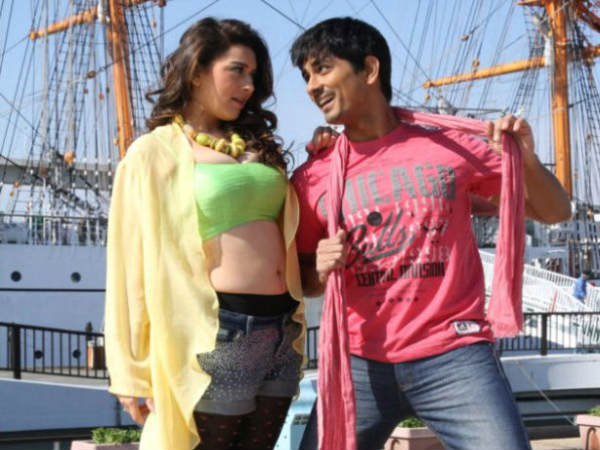 Well, Pasupathi says a series of lies to impress Siva Gurunathan, an ardent devote of Murugan, and gets a job. But soon the former lands in trouble when he will be caught by his boss at T20 match as Pasupathi takes a leave to watch the game by claiming that his mother is ill. However, he escapes from the situation by claiming that it was not him but his identical twin brother Kanthan Ganguly, who was in the stadium. Every now and then, he lands in trouble but manages to bail himself out of lies. As the fate has it, someday truth prevails. Continue reading the review on the slideshow...

Not A Blatant Copy

As I said before, the director has come up with interesting plots. The new elements that he brings into the script makes the difference. He has not just copied scene to scene rather has just taken an outline of the original story.

Shiva Comes Out With Flying Colours

Performance wise, Shiva is simply brilliant. His innocence and the way he delivers one-liners get full marks. The point that has to be noted here is that the young actor has not tried to imitate the superstar Rajini.

Prakash Raj perfectly fits the role. The way he expresses his anger and humour makes people to burst with laughter. Heroine Isha Talwar has a good screen space in the movie and is very charming.

Show stealer Santhanam appears in the climax and impresses audience instantly. Kovai Sarala is good, Suri, Sathyan and Ilavarasu are fine. Music by Yuvan Shankara Raja and Lakshman's camera works are okay. But Praveen-Srikanth's editing is not sharp. If the film was reduced by at least 15 minutes, it would have been an entirely different product.

The only drawback of the film is the length.