Naagin - Bhagya Ka Zehreela Khel is all set to hit the television screens soon! The makers had welcomed Nia Sharma and Jasmin Bhasin to the world of naagins and had also revealed a couple of promos giving us the glimpse into their characters. Now, the makers have released a 3.14-minute trailer, which hints at the story and also gives us a brief introduction of the important characters of the show.

As per the promo, Sayantani Ghosh (a naagin) is seen getting married to Shalin Bhanot in front of a temple, in a desert. Her parents warn her to not marry a human being as she is a 'naag vansh ki rajkumari'. But she ignores her parents warning about her love and gets married.

Post which, Shalin Bhanot and his family are seen murdered. Sayantani manages to save her baby (daughter - Nayantara) and declares that she will be seeking revenge on her behalf. The plot then shifts to the introduction of the hero, Vijayendra Kumeria and how he meets Brinda (Nia) and Nayantara.

The trailer has got positive comments and fans are eagerly waiting for the show to be aired. Sayantani's scene reminded fans of Baahubali's Shivgami. A user wrote, "Not a bad story." A few other users commented, "Ye promo best hai," "Mind blowing👌👌👌," "Bahubali ka Seen chura liya 😂😂😂😂," "Can't wait for this season," and "Can't wait. It looks really interesting." - (sic)

On Monday (December 9), the show was launched in Mumbai. Jasmin and Nia made heads turn with their glamorous appearances. Nia looked beautiful in a pink ethnic suit while Jasmin looked stunning in a blue sequin short dress. Sayantani Ghosh and Vijayendra Kumeria also graced the event.

Nia Talks About Her Character

Regarding her role, Nia was quoted by IANS as saying, "For the first time I am trying my hands in fantasy fiction that has become a very strong brand. Naagin demands commitment, versatility and I am playing the role of Brinda, who is simple and soft spoken in nature. She avoids fights even when people are harsh towards her." 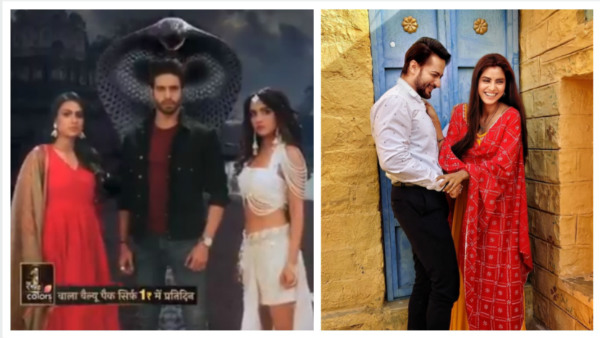