The Day 10 of Bigg Boss 14 begins with freshers fighting over the BB mall items. Everyone is adamant about their demands and senior Hina Khan gives Jasmin Bhasin a task to decide who will receive the items and who won’t but she has to give valid reasons. She decides Nishant Malkhani and Jaan Kumar will two items each as they are badly in need. She is then seen giving up her own three items when Gauahar Khan gives her an option of swapping clothing with salami chicken packets she had requested.

The entire episode here onwards focuses on the first nominations of the season. Bigg Boss asks all freshers to nominate two housemates in the garden area. They are supposed to stick the contestant’s photo on an earthen pot and put it on a scarecrow and break it after stating their reasons for nominating.

Most housemates take Nishant and Rahul Vaidya’s name during nominations. However, Bigg Boss nominates all the names that appeared in the nominations namely – Nishant, Rahul, Jaan, Shehzad Deol, Sara Gurpal, Abhinav Shukla and Eijaz Khan respectively. For the unversed, Sara was the only contestant from the aforementioned to have been nominated by just one vote (from Jaan).

This is immediately followed by Bgg Boss announcing a 'scene palatnewali prakriya.’ He announces that the Tofaani seniors aka Gauahar, Hina and Sidharth Shukla should pick one nominated contestant with 'aapsi sehmati’ and that member would get evicted immediately. This twist leaves everyone shell-shocked.

Jaan is seen apologising to Sara for nominating her. Seniors are seen discussing the given duty. Hina and Gauahar say either Rahul or Nishant should get eliminated as they don’t interact much or get involved with even the seniors. But Sidharth is seen disagreeing with them. He believes Sara is fake and should be the one who gets the boot. The trio fails to reach a consensus as Hina and Gauahar completely disagree with Sid’s choice.

But they eventually compromise and let Sidharth have his way. However, Hina says that next time, when such disagreement occurs, he will have to go with her and Gauhar’s decision.

Sidharth announces to the house that after having gone through disagreements, they are eliminating Sara Gurpal from the Bigg Boss 14 house. Sara looks miserable and absolutely heartbroken. She is inconsolable and is seen saying that it’s not fair. Hina and Jaan also break down. Sara exits the house from the main entrance and as she receives a teary-eyed goodbye from the housemates. 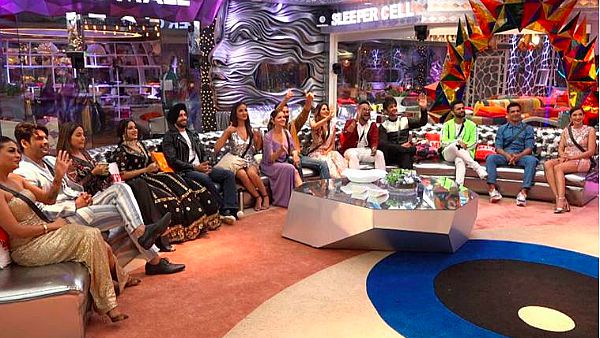