Currently, the situation across the globe is grim, as the Coronavirus pandemic has gripped most nations, including India. So, if you're practising social distancing and are spending the majority of your time at home, then we think the best way to keep yourself entertained is by watching some super cool movies.

We have listed out 5 gripping Bollywood thrillers that you can binge-watch online whenever you feel bored. Take a look!

Where to watch: Amazon Prime Video and Hotstar

Written and directed by Anurag Kashyap, Ugly is undoubtedly one of the finest thrillers to have ever come out from Bollywood. The storyline is pretty simple, about a little girl going missing, but Kashyap weaves his magic by adding many layers to this suspense thriller. Ronit Roy delivers a fantastic performance along with Rahul Bhat. Surveen Chawla, and other supporting actors, also play their parts well. Overall, Ugly is a much-watch if you're up for some serious, dark thriller.

Where to watch: Amazon Prime Video

Another underrated thriller which will keep you engrossed. Starring Abhay Deol in the lead, this one is not a typical Bollywood thriller which is obviously the best part about Manorama Six Feet Under. The film revolves around a government engineer who writes detective novels in his spare time. The story takes off when he gets involved in a web of lies and deceit after agreeing to spy on a minister. Navdeep Singh's directorial debut offers loads of twists and is unpredictable to the very end. Well, what else do you need in a thriller, right?

Where to watch: Zee5

This psychological thriller, starring Radhika Apte in the lead, is a must-watch for everyone who just loves good cinema, good content and good acting, irrespective of the genre. The film is about a woman named Mehak who suffers from agoraphobia and therefore fears to step out of her apartment. But staying inside isn't easy as well, because Mehak's apartment is haunted or so it seems. Radhika Apte's performance is stellar to say the least and Phobia, as a movie, is surely a work of art made skilfully with loads of twists and turns.

Where to watch: Netflix

A psychological thriller with a kickass storyline and concept, Game Over is with a doubt one of the most well-executed thrillers of recent times. Taapsee Pannu plays the role of a video game designer who is in a wheelchair and has a tattoo with an eerie story behind it. She's also afraid of the dark but, when an evil entity enters her house, Taapsee has no option but to fight it. The movie is directed by Ashwin Saravanan and he doesn't disappoint at all.

Where to watch: Amazon Prime Video

A gripping courtroom drama about a famous filmmaker accused of rape by a junior costume designer. Section 375 deals with a relevant subject, and while the makers could have made the film more responsibly, this Akshaye Khanna and Richa Chaddha starrer is a pretty good watch nonetheless. Throughout the movie, you'll be guessing about the end result and when it actually unravels, you'll probably have a lump in your throat. Despite being a courtroom drama, Section 375 has enough suspense aspect to keep you glued to the screens. 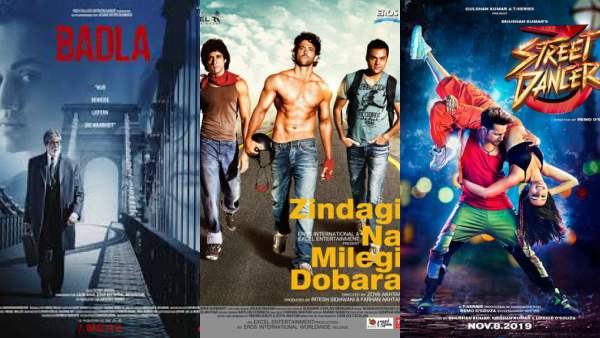