Beware, Riya Sen's latest Instagram posts will scare the sh*t out of you! The actress recently attended a Halloween party in London as 'The Nun' and later took to her Instagram page to share the pictures with her fans. Riya described the Halloween party as the haunting and captioned her pictures as, "A haunting Halloween with hosts that made it o so wicked and truly unforgettable."

Want to have a look at her pictures? We have it all for you right here-

We Just Got A Desi Version Of Valak!

Riya picked up an outfit inspired from the latest horror film The Nun.

While the character Valak in 'The Nun' wears black, Riya chose a white outfit. But that doesn't deter the spooky vibes a bit!

This close-up shot gives us a better glimpse into her spooky avatar and we must say, we has got the scary make-up done bang on!

Riya shared yet another picture where she is seen posing with her pals who are dressed up as zombies.

Here are few more pictures from the 'haunting'-

On the personal front, Riya Sen got married to her long-time beau Shivam Tewari in February this year. Later while speaking to daily, she spilled the beans about her wedding and revealed, "We met on Feb 12 at Harry's Bar in Juhu for a brunch, which got over at midnight! He had flown in from Delhi the previous night. Actually, we were set up by friends as a joke and he had flown down to meet me and I dragged Raima for the brunch." When asked how he proposed to her, Riya quipped, "He just woke up one morning and said: Let's get married NOW!" 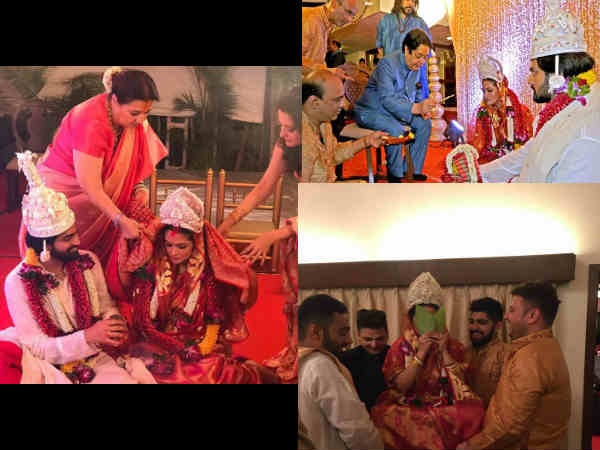