At a recent event, actor Ayushmann Khurrana spoke about his next release 'Shubh Mangal Zyada Saavdhan.' The movie is all set to release in February 2020. The actor will be seen enacting a homosexual character on screen. Aysuhmann stated that the movie will be the first one in Hindi cinema to being going all out with a gay love story.

An excited Ayushmann opened up about his upcoming work and stated, “A couple of movies are coming out next year. One is 'Shubh Mangal Zyada Saavhdhan' in February after that 'Gulabo Sitabo' both are exciting. 'Shubh Mangal Zyada Saavdhan' is more exciting because, as you know I am playing a gay guy. It a gay love story, this is the first time that we are going all out with a homosexual love story in the mainstream commercial Indian cinema. So it's really exciting.”

The 'Vicky Donor' fame actor is currently basking in the success of his recent release 'Bala'. The actor has had a wonderful run at the movies in the past few years. Ayushmann continues to push the envelope when it comes to interesting stories and has been a part of some path-breaking movies such as 'Bala', 'Article 15' and 'Dream Girl' in 2019 alone.

The uber-talented Khurrana recently wrapped up the shoot of Shubh Mangal Zyada Saavdhan. The film also stars the 'Badhaai Ho' duo Neena Gupta and Gajraj Rao playing Ayushmann’s parents. On the other hand, actor Jitendra Kumar has been cast as the other lead. 'Shubh Mangal Zyada Saavdhan' is directed by Hitesh Kewalya and produced by Aanand L Rai and Bhushan Kumar. The movie is all set to hit the silver screens on February 21, 2020. 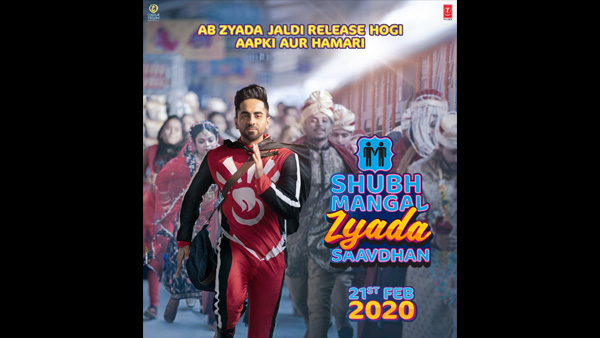