Corruption is a subject that has been done and dusted with, in Bollywood. Every now and then, a number of films keep popping up with the same subject, so it was no surprise for us when the maker of Gabbar Is Back announced this project, a remake of the Tamil flick, Ramana starring Vijaykanth.

A.P.J Abdul Kalam said and we quote, "If a country is to be corruption free and become a nation of beautiful minds, I strongly feel there are three key societal members who can make a difference. They are the father, the mother and the teacher."

Gabbar Is Back featuring Akshay Kumar does what the fathers, mothers and teachers have been failing to do.

Gabbar Is Back Plot:

This film is about a common man, a self-appointed vigilante, who is out to abolish corruption altogether from the society. He doesn't believe in forgiving or giving second chances, he wants to solve the problem of corruption by punishing the offenders with death.

This leads to a lot of bribe-taking and other offenders being found dead, hanging on trees, hoardings, etc.

Akshay plays the role of the self-claimed law enforcer who means business and is by far the best actor who could have essayed this character on screen. On watching the film, you shall realize that no other Bollywood actor would have been right for this role and that it was specially scripted and drafted for our Khiladi Kumar.

His understated demeanor delivers massy lines that have the power to sway people with such ease and conviction that you feel like sitting up and paying attention to this man who is standing on a car, giving an arousing speech on youth power, all without raising his voice.

Shruti Haasan is seen playing the role of a lawyer who is busy drinking coffee and romancing Akshay than fighting cases, while Kareena Kapoor looks breathtaking in the movie and nothing more. 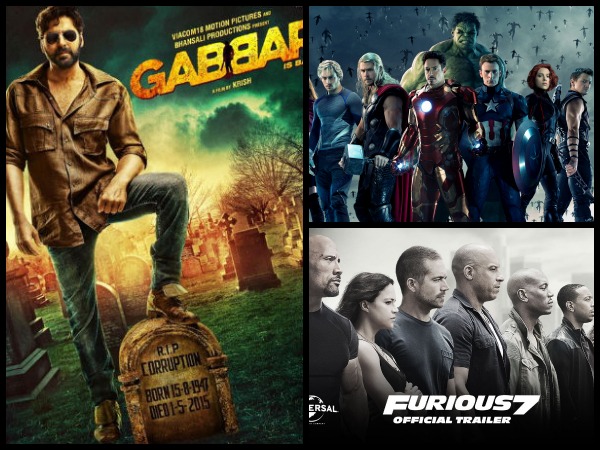 Gabbar Is Back movie has been conceptualized and made pretty darn well. It may get loud, it may get too flamboyant for it to seem believable but in a country like ours, you can never convey any sensible thing by being subtle.

You want people to listen to you, then you ought to be loud!

Akshay's brooding character is what will remain in the mind when you are walking out of the theater! There is something magical and serene in him that just knocks you off your feet. Our country needs a hero like this!

If Narendra Modi is on the lookout for a sidekick, then Akshay is the man!

Gabbar Is Back packs a punch with Akshay Kumar's heavy-weight dialogues and unabashed massy frames.

In spite of being a remake movie, Gabbar Is Back is the best version ever made. Watch it for Akshay and the viewers' constant whistles in the theater that prove why it must be watched.

It's interval n #GabbarIsBack is good till here. Now let's see how will be 2nd half.

My love for you and your acting has grown after special 26! A true entertainer!
Awaiting #GabbarIsBack .. Fan of your acting @akshaykumar

Akshay Kumar will be seen in the role of Gabbar Singh, a vigilante who wants to abolish corruption from the society.

He doesn't believe in forgiving and kills all the corrupt people he comes across in the most brutal way possible.

Jaideep Ahlawat is essaying the role of a CBI officer in the movie. You would have earlier seen his power packed performances in the movie, Gangs Of Wasseypur.

A famous telugu actor, Suman Talwar is seen essaying the role of villain in the movie. He is debuting in the Bollywood industry for the first time.

Shruti Haasan who is seen romancing Akshay Kumar over a cup of coffee is playing the role of lawyer in the movie.

Chitrangada Singh has no role in the movie, she is just seen a cameo appearance, an item number in the movie.

Gabbar Is Back movie features Akshay Kumar who just steals the show. In spite of the presence of other veteran actors in the movie, you just cannot take your eyes off him.