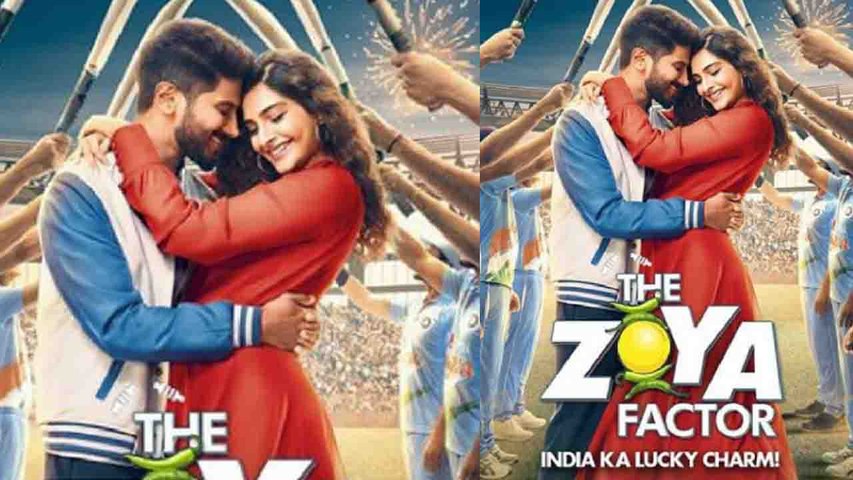 In an interesting scene in 'The Zoya Factor', a crowd of people gathers outside Zoya Solanki's (Sonam Kapoor) house to protest against her and burn her effigy after she refuses to attend the World Cup semi-final as a lucky mascot. A few minutes later, that same crowd tries to peep inside her house to get a glimpse of the cricket match playing on a television. The humorous undertones in the scene make you chuckle. But at the same time, you also realize how much the game of cricket is worshipped in our country.

Zoya Solanki, a junior copywriter, always finds herself in a soup. Her personal and professional life is a mess. Things take a bright turn when she is assigned to assist on a photoshoot with the Indian cricket team. Enters Nikhil Khoda (Dulquer Salmaan), the dashing captain of the cricket team.

While Zoya always had the hots for him, the handsome guy too finds himself getting attracted to her goofy ways. Soon, they start dating. Later, when Zoya blurts out that her family considers her to be lucky since she was born on the day India won the 1983 World Cup, the men in blue start believing her as their lucky charm.

Their belief in her 'luck factor' story further strengthens when they taste a series of victories after having breakfast with her. On the other hand, Nikhil dismisses Zoya's claims and tries to make his team understand that there's no substitute for hard work and self-belief. At one point, he even warns Zoya, "Woh tumhe Zoya Devi bana denge....Phir baanti rehna apna Luck ka prasad."

Soon, a series of misunderstandings create a rift between Zoya and Nikhil. Will the lovebirds patch up? Will India lift the World Cup under Nikhil's captaincy? The answers lie in the rest of the plot.

First things first, the film is based on Anuja Chauhan's bestseller, 'The Zoya Factor' and the writer has penned the screenplay of the film. Those who have read the book might notice that she has axed some characters and changed some sub-plots.

While Chauhan claimed in an interview that she did this so that 'the lines didn't feel like they were straight from the book, 'The Zoya Factor' does wobble a bit on the writing part. There are portions which drag a bit. Abhishek Sharma pulls off a decent direction as far as a chick-lit flick is concerned.

Speaking about the performances, Sonam Kapoor's comic timing is on point. However, the actress doesn't bring anything new on the table. Also, there are few moments where she goes a tad OTT.

One of the main reasons why you stay glued to the screen is Dulquer Salmaan. With his terrific screen presence, drool-worthy looks and impressive acting chops, the man adds his own charm to the role which looks tailor-made for him. There are moments where the actor simply lets his expressions speak. No doubt, there's going to be a spike in his female fan-following after this release. All we can say is, some more of DQ in Hindi films, please!

Sanjay Kapoor and Sikander Kher put up an earnest performance. Angad Bedi does a commendable job with his negative character. Anil Kapoor's cameo is quite hilarious.

Manoj Lobo's cinematography and Utsav Bhagat's editing works fine. Shankar-Ehsaan-Loy fail to impress in the music department. Barring 'Kaash', none of the other tracks stay with you.

Strangely while the film is titled 'The Zoya Factor', it's the 'Dulquer Salmaan' factor which works in its favour. If you are looking out for some easy, breezy watch, this Dulquer-Sonam starrer could be your pick for this weekend. I am going with 3 stars.