"Yeh ladki toh makhan hain makhan. Zhap zhap karke nikal rahi hain ekdum," a cop who is hand in glove with a drug dealer, excitedly informs the latter over the phone when Jerry (Janhvi Kapoor) sets out to run an errand for a massive drug delivery.

There's no doubt that Janhvi Kapoor is buttery smooth as the main protagonist in Aanand L Rai's latest production, Good Lucky Jerry which is a remake of Nayanthara's 2018 Tamil black comedy, Kolamaavu Kokila.

What's Nay: The plot gets a bit convenient at places

Set in Punjab, Jaya Kumari AKA Jerry (Janhvi Kapoor), a Bihari girl works as a masseuse while her widowed mother Sharbati (Mita Vashisht) sells momos for a living. Ah, veg momos to be specific! Their meagre existence gets a jolt when Sharbati is diagnosed with stage 2 lung cancer.

In dire need of money to cover the expenses of her mother's treatment and chemotherapy sessions, Jerry chooses to work as a drug mule for a smuggling gang; unbeknownst to her family. Things take a dark turn when Jerry decides to quit the dirty business. Soon, she finds herself treading a dangerous path where the lives of her loved ones are at stake. 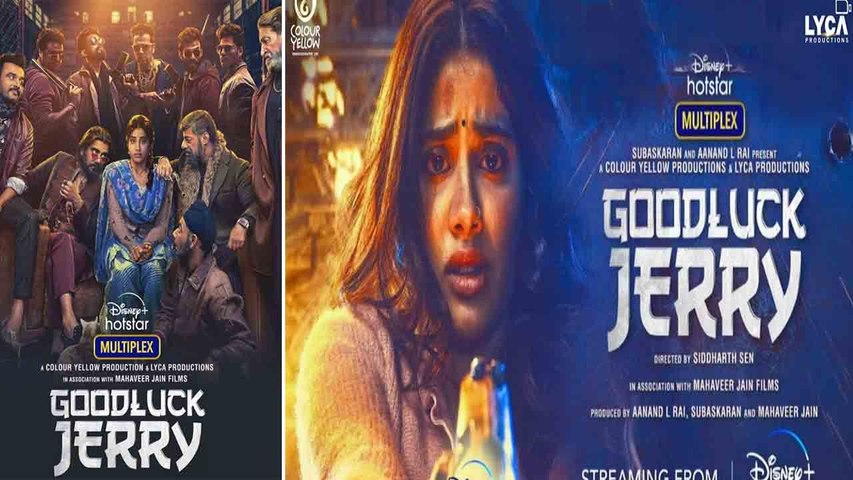 Written by Pankaj Matta and helmed by Siddharth Sen, Good Luck Jerry stays true to its source material (Kolamaavu Kokila) barring a change in the setup and a few minor deviations. Oscillating between dark humour and serious moments, Good Luck Jerry offers a zany ride that's quirky, ridiculous but fun. In Sen's world, it's the women who take the call because why should boys have all the fun?

Speaking about the shortcomings in the film, things get a tad convenient without proper explanation. A couple of jokes misfire at places. The narrative also runs in a loop at times which is a bit distracting.

Janhvi Kapoor has come a long way since her Dhadak days and Good Luck Jerry shows that she is definitely a talent to watch out for if she has good scripts and directors coming her way. Using her doe-eyed expressions, the actress portrays the meekness of her character in an effective way.

Next comes Deepak Dobriyal who is completely in the form as Janhvi's suitor Rinku Khanna. Yet again showcasing his terrific comic timing, the man is a complete laugh riot on screen with his silly antics and funny liners. Mita Vashisht, Neeraj Sood, Jaswant Singh Dalal, Sahil Mehta and Saurabh Sachdeva lend their own quirky touch to the narrative. Sushant Singh as the drug lord is good in his role.

The introductory song 'Jhand Ba' lends an interesting touch to the storytelling with its comic book style visuals. While 'Mor Mor' has a catchy beat, 'Cutie Cutie' catches your attention with its quirky beats. 'Paracetamol' has a hummable tune. 'Jogan' blends beautifully in the climatic portion of the film.

Staying true to these words, Janhvi Kapoor & Co. set out to have some fun and involve us in it as well.

We give 3.5 stars out of 5 to Janhvi Kapoor's Good Luck Jerry.