The charismatic and charming Jyothika is beyond any doubt, one of the biggest and most popular stars in Tamil cinema today. A gifted performer', the actress enjoys a strong fan following thanks to her remarkable versatility as an actress, stunning looks and lively personality. Over the years, she has worked with some of the biggest names in the industry and this has helped her find a foothold in the industry. At present, she is awaiting the release of Kaatrin Mozhi. The film has already created a reasonable amount of buzz amongst the fans and it is an important release for Jo,

Now, here is some awesome news for all you Jyothika fans out there. Today(October 18, 2018), on the occasion of the actress' birthday, the makers of Kaatrin Mozhi have released a special poster. In it, Jyothika can be seen in a lively and quirky avatar that she carries off like a boss. The poster suggests that this might turn out to be a good watch for the fans.

In case you did not know, Kaatrin Mozhi is a remake of the Bollywood film Tumhari Sulu and it has been directed by Radha Mohan. In it, Jyothika will be seen playing the role essayed by Vidya Balan in the original film.

Kaatrin Mozhi was supposed to hit the screens today(October 18, 2018) but it got postponed. It'll most probably hit the theatres after Diwali. 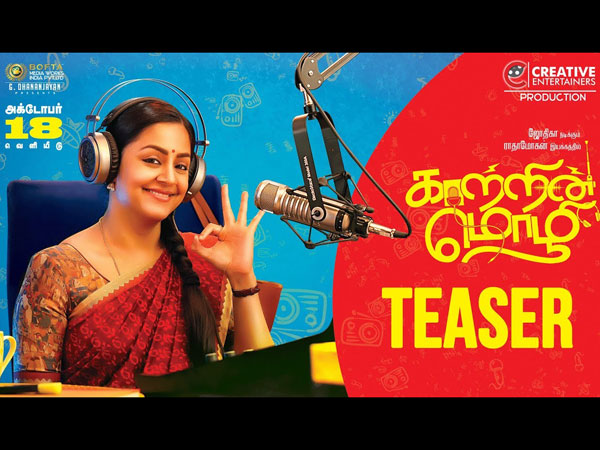 Kaatrin Mozhi Teaser: Jyothika Is Back With a Lively Entertainer!