Like every year, this year too, Zee Rishtey Awards was organised to honour popular Zee TV shows and actors. The ceremony was held on December 7 in Mumbai. The awards night was hosted by Ravi Dubey and Paritosh Tripathi. It was a star-studded event. Jay Bhanushali, Udit Narayan, Karan Wahi, Himesh Reshammiya, Udit Narayan and others graced the red carpet event. Actors like Shraddha Arya, Reem Shaikh, Kanika Mann-Nishant Malkani and others performed at the event. Take a look at a few inside pictures from the event.

Anita Hassanandani looked gorgeous in a red sari as she walked the red carpet at the event. Sharing a few pictures, the Yeh Hai Mohabbatein actress captioned them, "From now on only and only my watchman is clicking my pics! 😂🤣😂🤣 #zeerishteyawards2019."

Haiwan actress Ridhima Pandit dazzled in a grey off-shoulder dress. The actress shared a few pictures and videos from the event and captioned one of the videos, "I did manage to walk the red carpet, not so bad, eh?"

Tujhse Hai Raabta actress Reem Shaikh was seen posing with Ishq Subhan Allah actor Adnan Khan. She captioned the picture, "Adnan why did you get so conscious 😂 @adnan_a_khan you're such a sweetheart ❤️," to which the actor replied, "Standing there with insta queen and you expect me to be normal. (supremely talented as well) @reem_sameer8."

Reem was also seen posing with her Tujhse Hai Raabta family, who were seen in all pink attire. She shared the picture and captioned it, "Hum sab ka kuch toh hai raabta ✨ #tujhsehairaabta #zeerishteyawards2019." 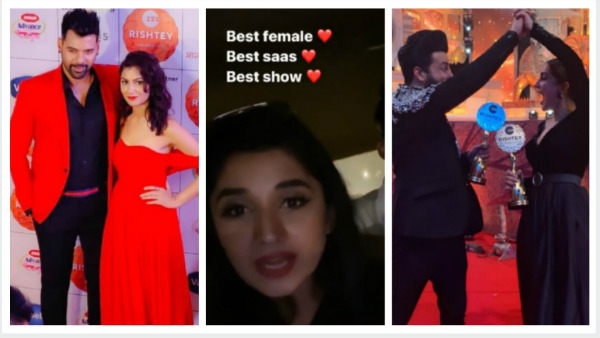