With the release date of Ajay Devgn-Rakul Preet Singh-Tabu starrer De De Pyaar De inching closer, the makers have been dropping songs one after the other. After a funky wedding number and a romantic song, the third song from the film titled 'Hauli Hauli' has made its way on the internet. 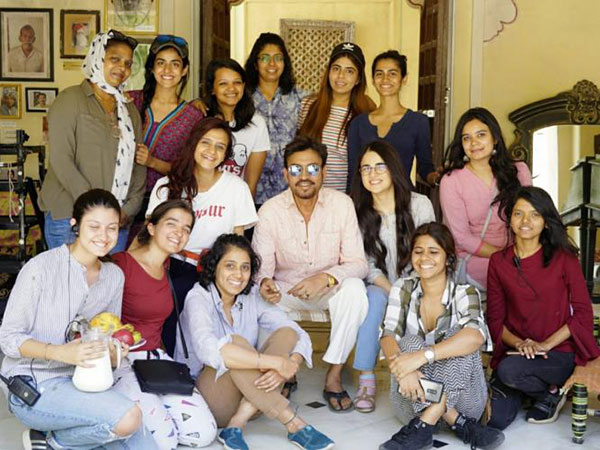 Irrfan Khan, Radhika Madan & Co. Are All Smiles On The Sets Of Angrezi Medium!

The funky number has Ajay Devgn, Rakul Preet and Tabu unleashing their swag and burning the dance floor with some infectious dance floor. While the leading ladies looking their smoking hot best, Ajay too looks quite stylish.

'Hauli Hauli' is composed by Tanishk Bagchi and also features a rap by Mellow D. It has vocals by Garry Sandhu and Neha Kakkar.

Speaking at the trailer launch of the film, Ajay said, "Today things are different than what they were ten years ago, in terms of shelf life of female actors. Now they have more shelf life or as much shelf life as male actors. There is no difference today, but earlier there was. We have Tabu and Kajol and others working still," further adding that age is just a number.

Speaking about De De Pyaar De, the film marks the directorial debut of Akiv Ali. It revolves around a 50 year old divorcee played by Ajay Devgn who falls for a girl half his age (essayed by Rakul Preet). Tabu plays the role of his ex-wife. The film also stars Alok Nath.

Irrfan Khan, Radhika Madan & Co. Are All Smiles On The Sets Of Angrezi Medium!