Deepika Padukone starrer Chhapaak has been making headlines prior to its release because of all the wrong reasons. While #BoycottChhapaak was trending yesterday on social media, now it seems like the film will face some legal issues.

According to a report in Times Of India, Laxmi Agrawal's lawyer, Aparna Bhat is filing a case against the makers of Chhapaak for not crediting her in the film. Aparna took to her facebook page after watching the film and was appalled by the absence of her mention.

She further shared in her post, she might not be able to fight with powerful Bollywood producers like Deepika Padukone but will not be silent about it either.

She wrote, "Have never been the one to demand attention to my work. Deeply disturbed by the turn of events post watching Chhapaak. Compelled to take legal action to protect my identity and preserve my integrity. I represented Lakshmi in her criminal trial in Patiala House Courts... tomorrow someone will represent me in my cause...Ironies of life."

Aparna seemed deeply disturbed by the makers failing to mention her throughout the film. She added, "I thank all my friends who endorsed my contribution and challenged team Chhapaak in failing to say even "Thank you!!". I cannot match the powers of these mighty producers of Bollywood but keeping quiet will further endorse injustice. I have decided to take my cause to the next level. Ready to face the consequences."

The film, on the other hand, is receiving good reviews and also has a huge fan following of the actress backing it up. It is speculated Deepika's Tuesday visit to the JNU campus will not affect the box office collections. Directed by Meghna Gulzar, Chhapaak will see Vikrant Massey along with Deepika Padukone in the lead roles. The film follows the story of acid attack survivor Laxmi Agarwal.

Chhapaak will hit the screens tomorrow on January 10, 2020. 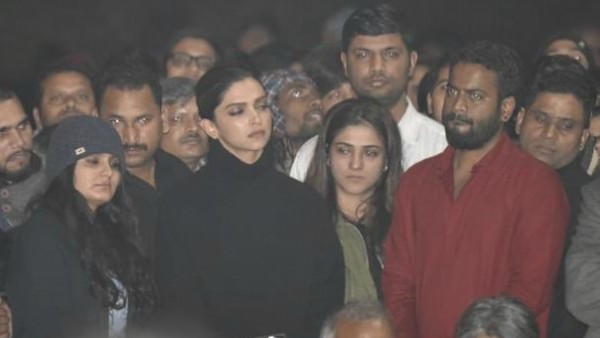