Masss(Massu Engira Masilamani) has been released amidst much expectations even though the filmmakers chose not to hype the movie prior to its release. Has their tactics worked? What does the Suriya flick has to offer? Continue to read our movie review to know.

Suriya and his friend Premji are two local conmen who are forced to loot some hefty amount from a dreaded gang. They meet with a major accident while returning with the money.

After recovering from the accident, Suriya learns that he has acquired the special ability to see ghosts and spirits. A few ghosts approach Suriya asking him for certain favours, one among them is another Suriya(with the Ceylon slang).

After having lost his money in the accident, Suriya decides to help the spirits and as a return favour, the spirits help him to earn some extra bucks.

As expected, Suriya walks away with all the appreciations as he has once again delivered. Special efforts taken by him to get his Ceylon slang right coupled with his near-perfect body language is praiseworthy.

Other bright performances comes from Parthiban, who shines with his witty one liners as a cool cop and Samuthirakani who impresses one and all as a baddie.

On the downside, Nayantara, Pranitha and Premji give us the impression that they are a total mismatch to the entire script. Nayantara, who looks gorgeous as always, has been underutilized.

Write Your Own Reviews About Masss Here

What stands out in the entire movie is Venkat Prabhu's unique writing and Yuvan's powerful background score. While the director keeps us guessing throughout with lots of twists and turns, Yuvan yet again proves he usually reserves his best for Venkat Prabhu movies.

Editor Praveen KL makes sure the plot doesn't gets predictable with his unusual cuts. On the flip side, he keeps the run time just below par which subsequently becomes one of the negatives of this film.

Cinematographer RD Rajasekhar adds value to the film with his refreshing angles. His usage of colours improves the overall feel of the movie.

What lets down, not just the technical aspect, but the entire movie is its poor CG works. With a few directors trying to take Tamil cinema to the next level with amazing visual effects, Masss disappoints in that facet as graphics play an important part in a movie like Masss.

Thanks to Suriya's brilliant performance and Venkat Prabhu's intriguing story telling ability, Masss will surely be enjoyed by the masses albeit poor VFX hindering the quality of the movie.

Check out some of the best scenes with interesting trivia about Masss in the slides below: 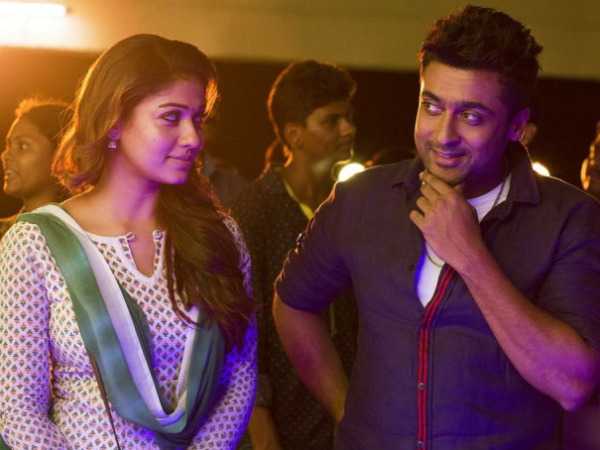 The film was officially launched with a puja on 14 April 2014. Principal photography was reported to start from 11 July 2014, but commenced three days earlier in Chennai. The first schedule was shot in a house on the ECR stretch for 15 days.

The team reportedly continued filming in Ooty, Kerala and Kullu-Manali in North India. Forty percent of the filming was completed by the end of September 2014. In November 2014, the first song was filmed, which was choreographed by Ajay Raaj.

Suriya As The Ghost

The film was touted to be the first Tamil film to be shot in 3D from the beginning, but Venkat Prabhu later informed that it was not true. It was reported to be a horror comedy. While Venkat stated that he was 'trying something new' and that he cannot reveal the genre.

Though it is difficult to incorporate action, romance, comedy, horror as well as sentiment in one movie, Venkat has done exactly that and certainly deserves a special mention for his effort.

By early December, the team shot crucial portions including a duet song sequence involving Suriya and Pranitha in Bulgaria. Following the schedule in Bulgaria, filming continued in Puducherry by January 2015.

Parthiban As A Cop

Actor-director R Parthiban informed that he had 'a special character to essay in Masss, a very significant one'. And, he has done full justice to his character.

Yuvan Shankar Raja began working on the film's music in August 2014 and stated that the soundtrack would be "completely wacky", going on to add that "the sounds that I've played with...will take the audience by surprise".

In November 2014, Tanvi Shah had recorded a song for the soundtrack, which was however, not featured in the album. The album garnered positive reviews from critics and reached the first position on the iTunes chart in India on 10th May 2015.

At an award function, Yuvan had said that he was working on a special track that would be a tribute to Michael Jackson and be on the lines of Jackson's 'Thriller', later revealed to be 'Poochandi'.

Though the movie suffers from logical loopholes and poor CG works, it certainly will entertain its audience, especially kids. Hence the movie might fare well at the box office.