Dulquer Salmaan has finally dropped the first single Sirikkalam Parakkalam from Kannum Kannum Kollaiyadithaal today. The track is a peppy number, as the title, which translates to 'let's laugh, let's fly', suggests. Unusual to his previous character, the actor is in a different avatar and is seen in a party mode with his friend, essayed by Rakshan. The catchy lyrics of the song is going to captivate the fans for sure.

Dulquer Salmaan's Kannum Kannum Kollaiyadithaal has been in news for its recent trailer launch which was loved by netizens. The actor essays a carefree software developer in the romantic thriller directed by Desingh Periyasamy. Celebrated Director Gautham Vasudev Menon plays a dark shade character which was showered with praises post the trailer launch.

The multilingual has its title inspired from AR Rahman's Song from the 1993 Tamil action-drama Thiruda Thiruda while its Telugu title Kanulu Kanulanu Dochayante is inspired from the maestro's song from 1993 Telugu film Donga Donga.

Bankrolled jointly by Viacom 18 Studios and Anto Joseph Film Company, the movie will have Ritu Varma as the female lead. Kannum Kannum Kollaiyadithaal has been shot in Goa, Delhi, Kerala and Chennai. The movie has music by Masala Coffee, a noted Malayalam music bank and is slated to release on February 28, 2020. 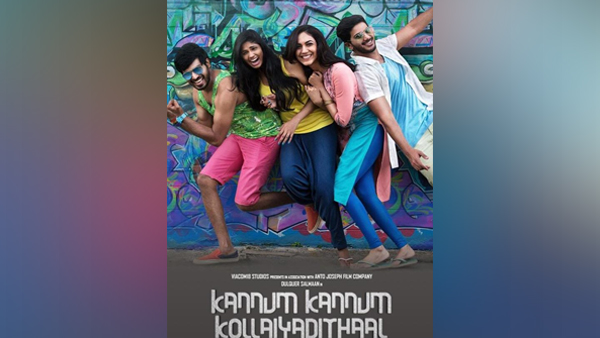 Kannum Kannum Kollaiyadithaal Trailer Is Finally Out: Dulquer Salmaan Is A Carefree Bee This Time