Natasa Stankovic got engaged to her boyfriend, cricket all-rounder, Hardik Pandya after a dreamy proposal off the coast of Dubai. The two have been dropping some serious couple goals on social media since then. Recently, Natasa took to Instagram to flaunt a new haircut and Hardik was all hearts over it. Check it out!

The gorgeous Natasa decided to show off her new hairdo on Instagram. She looked stunning in the makeover, donning a bright yellow off-shoulder top. She captioned her picture, 'Freshcut', with a scissors emoji. Her fiancé Hardik was super impressed, as he left a heart eyes emoji as comment on her post.

Hardik asked for Natasa's hand in marriage on New Year's Day while they were holidaying in Dubai. The couple had taken a yacht ride off the coast of Dubai, when Hardik got down on one knee and popped the question. Natasa took no time to say yes and the two sealed the engagement with a kiss.

Both Hardik and Natasa took to Instagram to share pictures of their special day, and received congratulatory wishes from Virat Kohli, Kuldeep Yadav, KL Rahul, Yuzvendra Chahal and others.

Natasa is a Serbian model and actress, who rose to fame after participating in the dance reality show Nach Baliye season 9. She is also a former Bigg Boss contestant. In Bollywood, Natasa has also starred in movies like Fukrey Returns, Action Jackson, Zero and The Body. 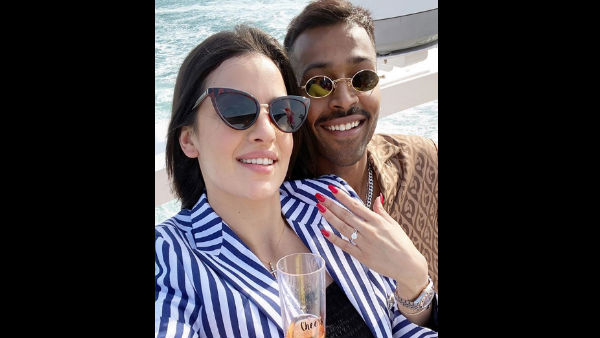