Adivi Sesh's latest crime thriller film, a sequel to HIT: The First Case starring Vishwak Sen, HIT 2, hit the screens on December 2 all over the world to positive reviews. Written and directed by Sailesh Kolanu, the movie is raving reviews for its fast-paced narration, performances, and premise. However, the choice of the film's antagonist didn't go down well with a certain section of film buffs, who wished it could have been better had the makers cast someone else other than Suhas, in the role of a serial killer. 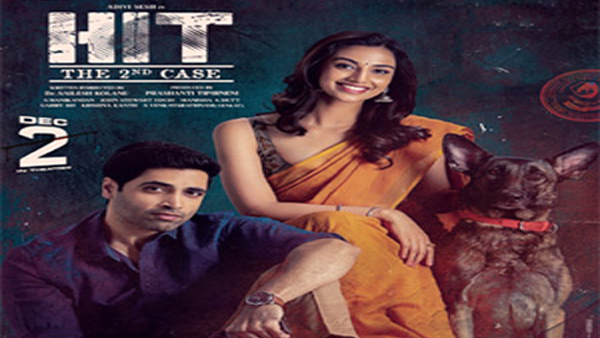 The movie stars Meenakshi Chaudhary as the female lead and it follows the journey of Krishna Dev AKA KD, an SP working in the Homicide Intervention team (HIT) in Visakhapatnam. He is known for solving all the cases he looks into but one, which we have no idea about. KD is assigned to crack down on a murder mystery that is more than what meets the eye. After the initial examination, it is revealed that the head and the body parts found at the scene of offense are not Sanjana's alone.

A disheartened KD then takes it upon himself to find out the serial killer and bring him to justice. Meanwhile, a cat-and-mouse chase ensues as the killer threatens to kill KD's lover, a would-be mother to his child.

The first installment of HIT, starring Vishwak Sen is available for streaming on Amazon Prime Video and according to the available information, the second part HIT 2's digital streaming rights were also secured by the same OTT platform. However, with the success that HIT 2 is getting, the movie might not enter the digital platform immediately. It may only live in the middle of January. The date is yet-to-be-announced.

HIT 2 AKA HIT: The Second Case is the production venture of Actor Nani's Wall Poster Cinema. He co-produced the film with his cousin Prashanti Tipirneni. Garry BH was the film's editor and S Manikandan worked as the cinematographer. MM Srilekha and Suresh Bobbili composed the film's tunes and John Stewart Eduri scored the background music.

The movie is made on a budget of Rs 10 Crore and is going forward with strong positive word-of-mouth. The film's upcoming sequel, HIT: The Third Case will feature actor Nani as HIT's head.