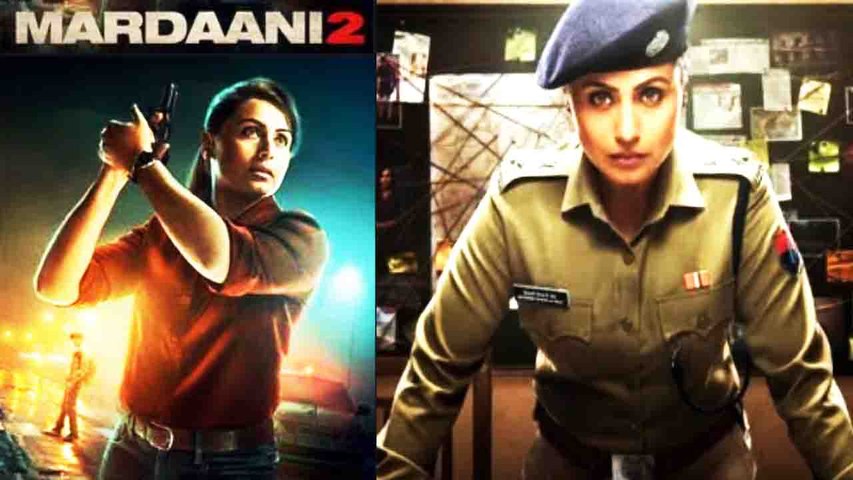 "Ab tu kisi ladki ko haath laga ke toh dikha, Tujhe itna maarungi ki teri twacha se teri umar ka pata hee nahi chalegaa," thunders Rani Mukerji's Shivani Shivaji Roy on the phone as she sets out to challenge a young serial killer, who preys on females and leaves their bodies battered and bruised. Her angst is quite relatable in the current context of violence against women in the country. Does Mardaani 2 hit you hard in the gut? Let's find out here.

What's Nay: The writing falters at places; the 'in-your-face' approach the makers take while talking about women empowerment in a scene.

Iconic Moment: The way the antagonist sets up a trap to violate a woman, sends shivers down the spine.

After displaying hard-hitting statistics about rapes in India from the National Crime Records Bureau (NCRB), Mardaani 2 begins on a chilling note in Kota, Rajasthan in India, where a deranged rapist Sunny (Vishal Jethwa) targets a young girl returning from a fair and ditches her horribly bruised body in an abandoned fort.

Enter top cop Shivani Shivaji Roy, who is now in charge of the state as Additional Commissioner of Police. Seeing the lady in khaki, a narcissist Sunny, who loves to show off his killings, sets out to leave a trail of violated female bodies. Will Shivani be successful in nabbing this monster?

While Gopi Puthran has a tight hold on his directorial reins, it's his writing that comes across as a bit disappointing in Mardaani 2. The repeated hammering of gender inequality and getting the male characters to mouth misogynistic dialogues look forced. Logic goes for a toss in a couple of scenes. Also, things happen rather conveniently for the characters in the film.

Rani Mukerji delivers a feisty performance as the no-nonsense cop and is in command of her role, right from the first frame. She is powerful, at the same time, displays vulnerability with ease. Watch out for the scene where she whips the underage offender with a spiked belt. The angst and intensity showcased by her in that sequence give you goosebumps!

Vishal Jethwa as the underage, smooth-talking criminal with a violent past, is a talent to watch out for! With his cold piercing light eyes, he unleashes menace on the big screen and gives you the creeps. The boy holds his own while sharing a frame with a seasoned actress like Rani.

There are no songs in Mardaani 2, and it goes with the subject of the film. John Stewart Eduri's background score is effective in lending a sense of thrill to the narrative.

Mardaani 2 holds a mirror to the existing ugly side of society that we live in. With robust performances by Rani Mukerji and Vishal Jethwa, this no-frills film gives you enough reasons to stand up against wrongdoings.