We wouldn't disagree if you called Kurukshetra as the most-awaited film of Sandalwood. The 3D mythological film, being one of its kind, was supposed to hit theatres a long time ago. Due to many known and unknown reasons, the release was pushed until now, when the moment has finally come. Darshan's 50th film will be screened across theatres worldwide, in a few hours from now. Here, we have all the live updates you must know if you're planning on watching Kurukshetra in the theatres!Director Naganna has gone to great lengths to make the bigger than life character look real and appealing.

Meanwhile, these unique facts associated with Kurukshetra might interest you.

Though, a lot is discussed about the nature of the film and enormity, nothing can overlook the fact that it was Ambareesh's last film. The Rebel Star will appear before his fans as Bheeshma in Kurukshetra. The fans are dealing with a bunch of mixed emotions as they are happy to see him entertain them once again, while his absence continues to be mourned.

Darshan's First Film Of This Kind

Darshan has acted in a variety of genres. We have seen several shades of him on screen. But he's featuring in a mythological avatar for the first time in Kurukshetra. The fans too are treating the film specially as its Darshan's 50th.

Reports say producer Muniratna has shed over Rs 50 crore on creating this magnificent piece. To you, it might come across as a huge sum, but guess what? The movie has already collected over Rs 20 crore only through its pre-release business!

Kurukshetra is dubbed in Kannada, Tamil, Telugu, Hindi and Malayalam. The Tamil version of Kurukshetra is being planned to be released a week later. Meanwhile, the Hindi version might hit the theatres by the end of the month. 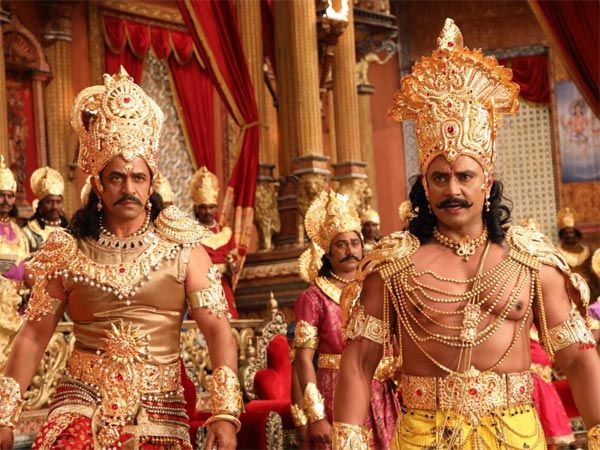 Kurukshetra To Be Released Only In Kannada & Telugu On Aug 9! Here's Why Other Versions Are Delayed