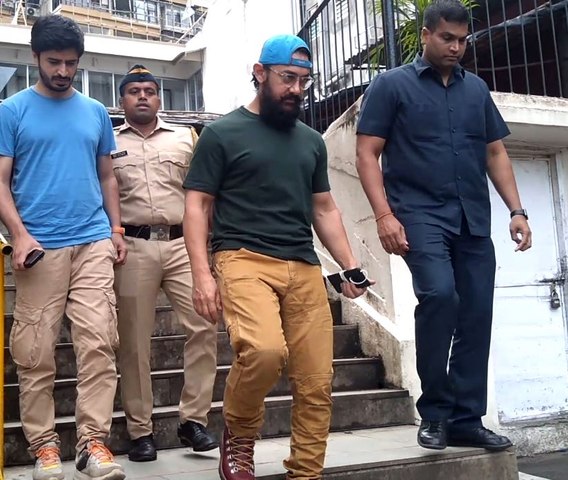 Aamir Khan cast his vote at a polling booth in Bandra;Watch video | FilmiBeat

The state of Maharashtra goes for polls today. Bollywood and television celebrities including Aamir Khan, Deepika Padukone, Hrithik Roshan, Karan Singh Grover, Karanvir Bohra and others cast their votes. Take a look at the pictures below.

Aamir Khan was spotted in a casual avatar as he stepped out to vote today. He was accompanied by wife, Kiran Rao.

Deepika Padukone was a vision in white as she cast her vote today.

Hrithik Roshan, who's currently basking in the mega success of his monstrous hit War, was also seen doing his democratic duty.

Dharmendra was all smiles for the camera as he cast his vote today.

Preity Zinta, as usual, was seen in a chirpy mode post voting.

The Bachchan Parivaar was also in attendance with Abhishek Bachchan, Aishwarya Rai Bachchan and Jaya Bachchan stepping out to vote. Amitabh Bachchan, however, was conspicuous by his absence.

Shah Rukh Khan and Gauri Khan stepped out in style to vote.

Kareena Kapoor Khan was spotted with her little munchkin Taimur as she stepped out to vote.

Karanvir Bohra was spotted along with his family at the voting booth.

Saath Nibhana Saathiya actor Vishal Singh was yet another person who bowled us over with his cool selfie, showcasing his inked finger.