Vaathi Coming, the recently released second single from the highly anticipated upcoming Vijay starrer Master, has totally impressed the Tamil music lovers across the world. The lyrical video of Vaathi Coming, which was premiered on March 10, Tuesday, has taken social media by storm.

As per the latest updates, the 'kuthu' song from the Vijay starrer has crossed 10 Million views on YouTube. Vaathi Coming crossed the 10-Million mark within the first 3 days of its release. Anirudh Ravichander, the music composer of Master confirmed the reports through his official social media pages by posting a special video clip, recently.

Vaathi Coming, which is widely called as the 'Thalapathy Kuthu', is composed by Anirudh Ravichander and penned by Gana Balachander. The music-director and lyricist have also lent voices for the fast number. The lyrical video of the highly interesting second single of Master hints that the movie has an extraordinary dance sequence featuring Thalapathy Vijay in store, for its audiences.

The post-production of the action thriller, that marks Vijay's first collaboration with both director Lokesh Kanagaraj and actor Vijay Sethupathi, is going on in full swing. As per the latest reports, the Thalapathy of Tamil cinema has already finished the dubbing for his portions in the movie.

The Lokesh Kanagaraj directorial will feature Makkal Selvan Vijay Sethupathi as the main antagonist. Malavika Mohanan, the Petta fame actress, is appearing as the female lead opposite Vijay in the movie. Master, which is produced by XB Creations, will hit the theatres in April 2020. 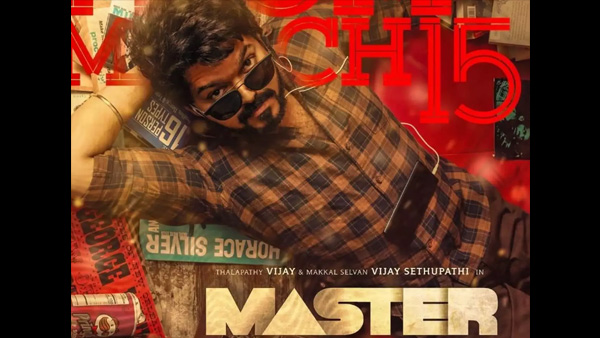 Master Movie Release In Trouble? Here's the Reason Why the Vijay Starrer Might Be In Crisis!