Vijay's Puli has been released across the world today after a last minute hiccup. Shrouded by hype and madness, Puli was one of the most anticipated films. Has it lived up to its expectations? Continue reading our movie review to know what exactly this fantasy flick has to offer.

Puli is set against the backdrop of a fantasy kingdom named 'Vedhala Kotai' which is ruled by its queen, played by Sridevi, and commandeered by Sudeep.

Sudeep leads a mysterious team of warriors known as 'Vedhalangal' and they posses certain super human abilities. Putting their super powers to good use, Sudeep and his gang impose many unreasonable taxes on the citizens who reside in the surrounding villages.

They also treat them as slaves and take complete control over them. Unable to free themselves from the evil clutches of 'Vedhalangal', the villagers finally turn towards Vijay after certain turn of events.

How Vijay takes on the evil gang of 'Vedhalangal' despite their super power abilities forms the crux of the story.

Click Here to Check Out Fans Celebrating The Movie

Vijay has delivered the goods, especially in stunt and song sequences. While Shruti Haasan impresses with her alluring looks and has really excelled in a couple of scenes.

But, extraordinary performances comes from actors like Sudeep and Sridevi. While Sudeep looks more than convincing as a evil commander, Sridevi plays her part perfectly well.

Supporting actors like Prabhu and Thambi Ramaiah have come up with decent performances. Surprisingly, comical sequences works only in parts and can be considered as one of the negatives of Puli.

The much talked about VFX and CG shots stand out in the entire film as such high quality visual effects is something new to Tamil audience and hopefully, it is here to stay.

Cinematographer Natty is the biggest strength of Puli. The way he has captured the entire movie has not only enhanced the visual quality but also elevates the overall feel of the film.

Art Director Muthuraj has done his best in putting together the fantasy world. Perhaps, more investment from the producers might've taken the art department of Puli to a whole new level.

While the screenplay in the first half is on the slower side, the movie picks up pace in the latter half. But undeniably, Chimbu Deven should've come up with a better screenplay for a movie like Puli.

Another let down is Devi Sri Prasad's background score as his music fails to enhance the overall intensity which would've otherwise helped the movie's lacklustre screenplay.

Kudos to director Chimbu Deven for bringing back the fantasy genre to Tamil cinema. However, his average screenplay and other technical faults makes Puli just a one time watch. 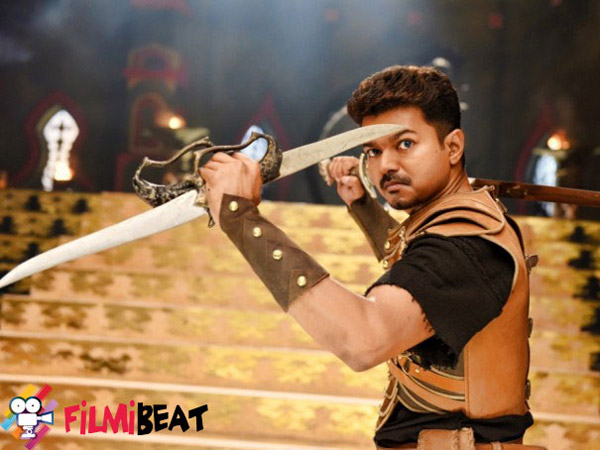 Top 10 Reasons Why Ilayathalapathy Vijay's Puli Will Be A Massive Blockbuster Hit!

Early reports claimed that Dhanush was initially roped in to play the lead role and that the film would be titled 'Maareesan'.

Director Chimbu Deven later went on to say that this project was written with Vijay in mind and that he wouldn't have helmed Puli with some other actor.

It was also reported that AR Rahman would compose music for the film. But Devi Sri Prasad was signed in subsequently.

Hansika had recently revealed that Puli was challenging to her as the film deals with ancient Tamil (partly). The actress reportedly said that it wasn't an easy task getting the lip-sync right.

Earlier it was reported that Hansika and Genelia D'Souza would be a part of the film. However, Shruti Haasan bagged the coveted role.

Magic In The Air

Puli is one of those rare fantasy Tamil movie that deals with magic and witchcraft.

Click here to listen to all the songs from Puli.

After several producers failed to take up this ambitious project, Vijay's PRO PT Selvakumar and distributor Shibu Thameens took it up.

Makuta VFX was brought on board to take care of the film's animations and special effects.

Shruti Haasan confirmed that she has signed on the dotted lines and thus would be a part of this prestigious film in July 2014.

It was reported that the animation and graphic works of Puli was handled by some of the best technicians across different countries.

T Muthuraj was confirmed as the movie's art director and he began his work in 2014.

Chimbu Deven and cameraman Natty searched for locations in Kerala, before finalizing schedules in Chalakudi and Nelliyampathy.

Four stunt choreographers were roped in to take care of action sequences. International choreographers Sang Lin and Pradit Seeluem were brought on board alongside Sunil Rodrigues and Dilip Subbarayan.

While Shibu Thameens is releasing the film in Kerala, Karnataka distribution rights were purchased by S Narayan for a whopping price.

The audio rights of the film was bagged by Sony Music India for a relatively large price.

The satellite rights has been purchased by Sun TV for a record price of ₹22 crore.

Unfortunately, tax wasn't exempted for Puli in the state of Tamil Nadu despite it getting a clean 'U' from the CBFC.