Sridevi was a magician when it came to her transformation in characters which she played on reel. Touted to be India's first female superstar, the actress remained the undisputed queen in the 80s and 90s.

Give her any genre and she would hit it straight out of the park. Her tryst with the arclights began at a tender age of four with a devotional film called 'Thunaivan' and since then, there was no looking back for the acting stalwart until her untimely demise in 2018.

From playing a woman with retrograde amnesia in 'Sadma', a shape-shifting snake in 'Nagina' to her twin sisters act in 'Chalbaaz', the late actress slipped into every role effortlessly and totally owned it.

On Sridevi's 56th birth anniversary today, we bring you an interesting trivia about one of her most memorable films, Yash Chopra's 'Chandni' which starred Rishi Kapoor and Vinod Kapoor as her leading men.

Not many know that the late actress wasn't the first choice for this romantic film. Initially, Yash Chopra was planning to make this film with Rekha. However, destiny had some other plans and the role fell into Sridevi's lap.

The Original Story Of Chandni Revealed!

In an interview, Chopra revealed, "In my mother's original story, Chandni marries Rishi Kapoor's character Rohit. They have a son. But post-crash Rohit becomes insecure. His family becomes abusive and finally Chandni walks out on her husband and young son. She finds a career and love again with Lalit, played by Vinod Khanna."

The Twist In The Tale

"The last scene had her son, now a teenager, coming with a bouquet of flowers to his mother's wedding because he understands her reasons for leaving and supports her quest for happiness."

Yash Chopra Changed The Film's Climax For This Reason

"Yashi ji loved the story but perhaps he felt it was too ahead of its times. And so after many discussions, the narrative became tamer - Chandni and Rohit are engaged, not married - and eventually they are reunited at the end,' revealed Chopra.

Anupama further added, "The film also became impossibly glossy and beautiful. It had a few loopholes in logic - especially that bit where Rohit and Lalit meet abroad and sing a song about the woman each loves, not knowing that they are both singing about the same woman."

The film went on to become the second highest-grossing film of 1989. It even bagged a National Award and a Filmfare award for Best Cinematography.

In the book 'Yash Chopra: Fifty Years Of Cinema', the filmmaker revealed, "We began with a different treatment of the same film, more like an art film. We had a muhurrat in November with Sridevi, Chintu [Rishi Kapoor] and Vinod Khanna. It was a romantic shot, with fantastic, beautiful people. In the first version, Sridevi marries Chintu, has a son. In the second half of January we went to Delhi. We started a two-day shoot. When mixing, I thought it was wrong and decided to change.

The next morning I sat day and night changing the script to the interval. Sridevi said she had full faith in me. Chintu asked me to tell him the scenes. Vinod was an action-oriented hero, so there was to be a scene where he saves Sridevi from a fire. I cut it and rang up Sridevi and said I was going to repicturise it. The distributors were worried. How can you have Vinod Khanna and no action?

One distributor even left the picture because I was talking Vinod Khanna in a non-action role. I wanted him because he was a mature person and would suit Sridevi. I gave them a discount so the terms were in my favour. I wanted a romantic film with beautiful music. I was sick of violence." 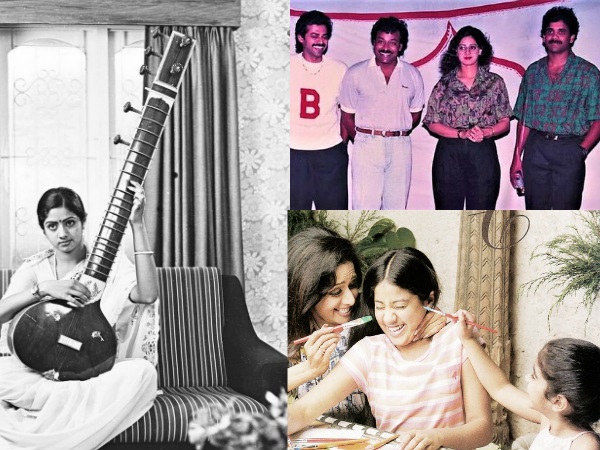 Sridevi's First Birthday After Her Demise: These Rare Pictures Of The Late Actress Are Pure Gold!