Veteran actress Neelima Azeem who prefers to keep her personal life under wraps, recently opened up about her broken marriages with Pankaj Kapur and Rajesh Khattar in an interview with an entertainment portal.

Neelima recalled her first marriage with Pankaj Kapur with whom she has a son, actor Shahid Kapoor and said that she was married to her best friend but wasn't aware that one could experience such a fall in life.

Speaking about how her separation from Pankaj Kapur affected her, the actress told Bollywood Bubble, "It was the first time when I actually experienced grief, sorrow, rejection, anxiety, pain and fear of the unknown. And a whole lot of insecurity. And also a sense of feeling claustrophobic that I have to stay with my parents now and raise the child on my own and how I am going to be moving towards being the independent girl that I always wanted to be and in many ways was."

Neelima said that it took her a year and a half to put herself together and added, "I don't see it as a terrible thing that happened to me in life. I just simply think that I needed that bump. We all must understand that we are not extraordinary or entitled, we are simply human beings that can be rejected.

The Sadak actress said that before her divorce from Pankaj Kapur, she had never faced rejection in her life. And so, the failure of her first marriage hit her hard.

"Because you know I was in my own opinion God's favourite child. Because I got everything so beautifully, at the age of 15 I debuted as a Kathak exponent and there was no looking back. Then, I became the highest in demand dancer and everything was so wonderful. Then I had this wonderful friend who I got married to. Everything was just beautiful. My parents were wonderful. I had a great crowd around me. Toh mujhe yeh pata hi nahi tha ki zindagi mein aisa bhi hota hai jismein paun fisal jaye aur aap gir jaayein. Aur rejection ka toh koi sawaal hi nahi hai because everybody used to love me and follow me around (I was not aware that one can slip in life and fall flat. There was no question of rejection because everybody used to love me and follow me around," Neelima told Bollywood Bubble.

Post her split with Pankaj Kapur, Neelima Azeem tied the knot with actor Rajesh Khattar and welcomed their son, Ishaan Khatter in 1995. However, the couple soon got divorced.

Talking about her second marriage, Neelima shared, "The second marriage would have lasted if certain things didn't happen which were difficult to encounter... It was difficult, it was an impossible feat. I think it would have worked out if there was more control and more logic and sense it in. But it went, it flew out. And it happens in Bombay with all the struggle and with all the pressures, sometimes people succumb to it. But I have the ability to get up and start walking again, and I have these lovely boys in my life, my sons (Shahid and Ishaan), they were a great inspiration for me and a source of so much happiness and encouragement."

In the same interview, the Sooryavansham actress also opened up about how her failed marriages must have impacted her sons, Shahid and Ishaan.

She said, "I sometimes even would like to say that maybe children who are watching us taking certain choices and then having those mighty falls might decide to be more stable than us. So I'd like to give that credit to the kids and not hog all the limelight and say 'Oh, I was so wonderful that they learnt all the wonderful things they saw in me.' They saw some flaws also and they said, 'okay, this is not what I am going inculcate this', because the DNA is the same, we are going to be very consciously keeping a part of us out. So, they must have even learnt from my pitfalls and my impulsive or wrong, silly choices or whatever you may say. In a complete sense, in a larger perspective, I have been there for them." 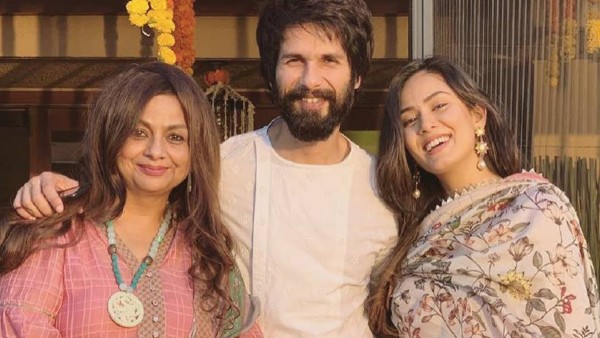 ALSO READ: Neelima Azeem On Shahid's Wife Mira Rajput: She Is Somebody Who Doesn't Try To Get Attention