Since its inception, Sandalwood has produced some of the finest mythological films. Over the years, however, with the changing trend, the audience displayed more interest towards 'mass' films. But, the latest Kannada film Kurukshetra seems to have come across as a breath of fresh air for the viewers. The 3D mythological film consisting of a stellar ensemble cast is garnering a lot of attention. Darshan's 50th film released worldwide today. It is also Rebel Star Ambareesh's last appearance on screen. Are you planning on catching this film in the theatre? Read the complete movie review below!

Muniratna's film uses the great war of Mahabharata as the premise. Anybody who's familiar with this epic tale can guess how the story goes about. But, the execution of the same on-screen is what is stealing the show. We wouldn't give out much regarding the story as that would be a buzz kill. However, it all starts when Draupadi laughs at Duryodhan.

Until one got to witness Kurukshetra on screen, the makers were highly criticised for taking way too long to create it. But, director Naganna has gone to great lengths to make the bigger than life character look real and appealing.

Literally, everyone is talking about the war scenes in Kurukshetra. Though it hosts other entertaining facets as well, the fight scenes with the use of ancient weapons are imprinted on the minds of the viewers. The scenes have been well placed in a manner that wouldn't bore the audience.

Being one-of-its kind, Kurukshetra's run-time is over three hours. It indeed is a tough task that can only be achieved with dedication and talent, when presenting a mythology on-screen for a long time while keeping the attention of the viewers intact. Naganna has aced this factor to a large extent.

Though the teaser disappointed the fans, the movie seems to have made up for it. The VFX is pretty decent, except for a few green matt-related glitches here and there.

Unlike other multi-starrer films, in which a few characters overshine the rest, Kurukshetra presents a fine balance. This film also has the 'big' tag associated with it, because of the cast, which consists of well-renowned actors such as Darshan, Ambareesh, Ravichandran, Arjun Sarja, Nikhil Kumar, Haripriya and more.

D Boss as Duryodhan has done a brilliant job! Not only has he proved his skills through the acting and fighting sequences, but his expressions deserve to be praised too.
Meanwhile, watching Rebel Star play the great Bheeshma is quite overwhelming. Just like him, every other actor has done justice to their character. Nikhil Kumaraswamy also has managed to perform as well as some of the most-experienced actors in the film. You ought to watch the scene wherein he enters the Chakravyuha during the war of Kurukshetra.

Music director Harikrishna's composition is another highlight of the film. Besides, the background score incorporated in the war scenes give you goosebumps, the other tracks such as Jumma Jumma and Saahore Saaho would make you want to move in your seats.
He's done a great job by bringing classical and modern beats together.

Kurukshetra has definitely made up for all the waiting it put its audience through. If you are bored of watching the usual commercial films, which focus on guns and machete, Kurukshetra offers entertainment with education. Its enormity is definitely worth giving a shot. 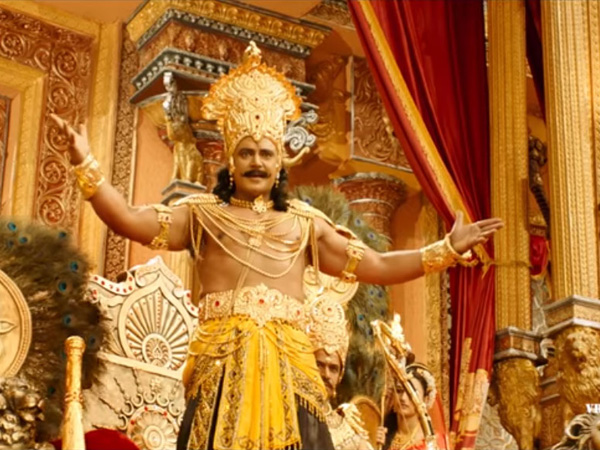 Kurukshetra Twitter Review: Here's What The Audiences Have To Say About Darshan's 50th Film!