Ranbir Kapoor's birthday is nearing, while his fans and co-workers are excited, the star seems rather casual and not interested in celebrating it in a big way.

Nonetheless, a lot of questions regarding his birthday plans were asked to him at the Tamasha trailer launch event and he chose to reveal that it'll be all work and no play this birthday.

To which Deepika interrupted, "How can we make it (your birthday) special for you?" 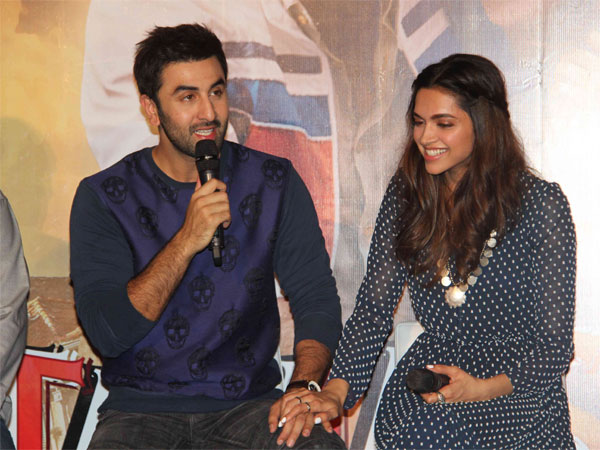 Deepika Padukone Talks About Her Chemistry With Ranveer And Ranbir

His ex-girlfriend, Deepika Padukone was immediately asked what her gift to the Tamasha co-star be and she promptly replied, "He has everything... lots of good wishes, love and happiness to him."

For all those who got disappointed about the absence of an actual gift, let us tell you, Deepika showering love and happiness on birthday boy Ranbir is probably one of the best gifts he could get.

Director Imtiaz Ali quickly suggested Deepika to give Ranbir a cheque. To which Ranbir jokingly replied, "I would prefer cash."

So what is Ranbir Kapoor getting finally? Love and happiness or cash? Only after the D-day will we know! But we can surely add to this information that now Katrina will be putting double the efforts to make Ranbir's birthday a special one.

Ranbir Kapoor and Deepika Padukone spotted on the sets of a film along with Anushka Sharma.

A movie still from Yeh Jawaani Hai Deewani, a film that worked wonders on BO.

A candid moment captured when Deepika and Ranbir were talking.

Ranbir and Deepika Padukone spotted during the Filmfare awards.

The cast of Yeh Jawaani Hai Deewani posing together during the promotions of the film.

Ranbir and Deepika getting cosy at an event, while director Ayan looks on.

Fans have loved to see Ranbir Kapoor and Deepika Padukone together on screen.

Ranbir and Deepika spotted together during the promotions of Yeh Jawaani Hai Deewani.

A really old picture of Ranbir Kapoor and Deepika Padukone, when the couple were dating each other.