Sara Ali Khan's upcoming film Love Aaj Kal's trailer dropped some time back. Although fans were excited to check out the on-screen chemistry between her and her rumoured boyfriend Kartik Aaryan, a lot of them were disappointed with Sara's acting in it. Many called it overacting, and she faced heavy criticism and trolling for this.

Speaking to film critic Anupama Chopra, Sara opened up on how being criticized for overacting hurt her in a way that getting trolled for being overweight in the past hadn't.

"I don't mind being trolled for being fat. I don't mind if you troll me for wearing a cap. But I am here to act. That is my job. That is my profession. That is serious. So, when I am trolled for that, suddenly, with all the confidence still intact, it is harder for me to sit there and say ignore the trolls. For the first time, it actually kind of hurts. It hit me," she said.

Many thought that in a particular emotional scene, Sara was hamming it out, but she clarified that she was actually experiencing those emotions and crying in reality. "That was not a ham shot on our part. I was really crying. I felt like how Zoe would have been feeling at that moment in time. I did what came to me organically at that point in time," she said.

She added that she knew what her character was feeling in that moment, but since she wasn't allowed to see the monitor, she had no idea what she was looking like.

Love Aaj Kal is Imtiaz Ali's follow-up of the 2009 movie of the same name starring Deepika Padukone and Saif Ali Khan. It is scheduled to hit theatres on February 14, 2020. 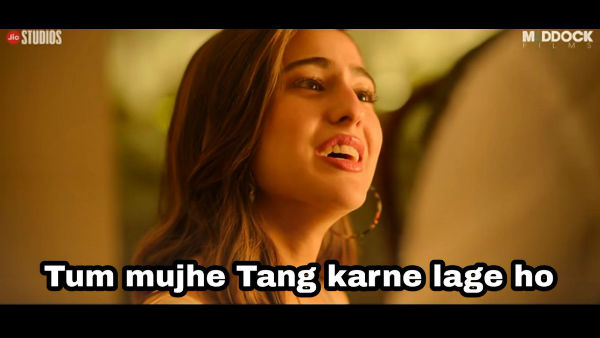