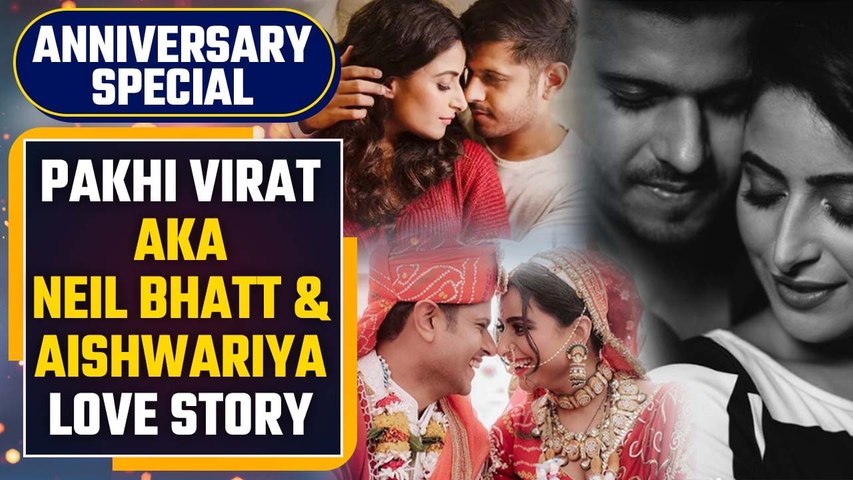 Star Plus' Ghum Hai Kiskey Pyaar Meiin, featuring Neil Bhatt and Ayesha Singh in the lead roles of ACP Virat and Sai respectively, has been winning hearts ever since its premiere in October 2020.

It has been a constant in the list of top-rated shows across channels and fans love the onscreen pairing of Neil and Ayesha. However, in real life, Neil fell in love with Aishwarya Sharma who plays the role of Patralekha aka Pakhi in the hit TV series.

After dating each other for some time, the duo exchanged wedding vows on November 30 in Ujjain last year in the presence of their families and close friends. Neil and Aishwarya tied the knot in a traditional Gujarati wedding and are in a happy space since then.

On the special occasion, Neil took to social media to wish his wife Aishwarya and posted a heartfelt note. Wishing Aishwarya on their first anniversary, Neil posted several gorgeous pictures from their wedding ceremony on Instagram.

He wrote, "It's been a year since we got married, seems like yesterday and yet feels like we've lived through so much together. We've graduated from being friends to companions. We fight with each other and love each other even more, I think that's the aim, to keep growing (heart emoji) growing together. Cheers to that and many more years to come. Love and love only (heart emojis) Happy anniversary aisharma812"

In the comments section, Aishwarya replied to Neil's anniversary wish and wrote, "Happy anniversary love of my life. may our love grow more stronger every day... love you infinity." Their ‘Ghum Hai Kiskey Pyaar Meiin' co-stars, industry friends, and fans too wished the good-looking couple on their anniversary.

After facing betrayal in old relationships, Aishwarya had reportedly reached a point in her life wherein she didn't want to get married. However, things changed when she met Neil on the ‘Ghum Hai Kisikey Pyaar Meiin' sets, and both of them came closer while shooting together for long hours. Here's wishing Neil and Aishwarya a happy wedding anniversary!