Filmmaker Milap Zaveri has been presenting Satyameva Jayate 2 as an ode to the commercial and Masala movies of the 80s that used to promise a combination of patriotism and entertainment. However, his directorial John Abraham starrer does not feel like a tribute at all but instead is a convoluted mess of a shabby storyline and screenplay coupled with forced dialogues and performances. On top of it, the triple act of John Abraham only adds to this laborious presentation of a film.

What's Yay: The 'Jan Gan Man' title track and John's considerable effort to put up with the badly curated plot and screenplay

What's Nay: The entire plotline and screenplay that make a mockery of patriotism by planting excess of over nationalism and jingoism. The over the top performances and dialogues coupled with the illogical action sequences.

Satya (John Abraham) is a Home Minister by day who is working hard to pass an anti-corruption bill and a ruthless vigilante by the night, killing all the bad guys. His twin brother Jay is a badass police officer who beats up the goons and flexes up his muscles for no apparent reason. The brothers follow in the footsteps of their father Dadasaheb (enter John Abraham again) who had given up his life while fighting against corruption. The only two female characters in the movie are the twin brothers' mother Suhasini (Gautami Kapoor) who's been in a coma for over half of the movie and Satya's wife Vijaya (Divya Khosla Kumar) whose presence struggles to act as a catalyst to take the plot forward.

Milap Milan Zaveri might have been mistaken if he thinks that curating a chaotic and cringefest of a plot, preaching jingoism and hypernationalism in the name of patriotism, making all the three main scream at the top of their voices while minting all the dialogues, making a mess by jumbling up all the social and economic issues grappling the country and having extremely illogical action sequences can act as a tribute to the 80s cinema. The yesteryear movies at least had a unique essence and an entertainment quotient that Satyameva Jayate 2 lacks. One fails to understand the need to rhyme all the dialogues to create a statement. The movie preaches women's upliftment on one side and on the other side has Anup Soni's character minting the dialogue, 'Agar Main Usse Pakad Nahi Paya, Toh Main Haath Main Choodiyan Pehen Lunga.' 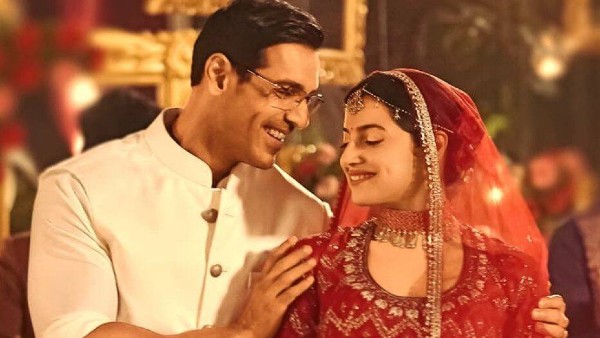 The director has added literally each and every issue such as farmer's rights, corruption, women's safety, lack of oxygen availability, treatment of a certain community in the society, children tortured and harassed to beg, bridges collapsing and young kids dying due to food poisoning. However what Satyameva Jayate 2 gives out a clownery of a message that just by promoting violence in the name of nationalism and patriotism and screaming preachy slogans, one can evoke the right kind of emotions within the audience. Forget emotions, the plot and the execution of the film instead evokes three times a headache to John's triple act in the movie. Needless to say, the movie fails to do justice to its first part too.

John Abraham's triple role has him shouting at the top of his voice, rhyming every preachy dialogue while beating up the baddies, flexing his muscles during the exasperating action sequences. One can make out that the actor who has churned out some quality performances in his career is trying his hard to carry the movie on his shoulder. But there is little you can do when the writing, screenplay and plot have gone to shambles. As Milap Milan Zaveri said in an earlier interview with a publication that his movies are 'cheat meals' for John so in this case, we will suggest the actor continue to focus on his chiselled physique and stay away from this kind of junk.

Divya Khosla Kumar is still in her 'Yaad Piya Ki Ane Lagi' mode in her every scene. It almost looks like she is reading her dialogues from a teleprompter and giving out a staring competition with her eyeballs wide-eyed in every scene. Gautami Kapoor tries to put up with a decent act but she doesn't look convincing as a mother figure to the central characters. Anup Soni and Harsh Chaya try their best to do justice to their part. Sahil Vaid is wasted in this one.

The action sequences choreographed in the movie include John Abraham breaking a huge table into 2 by just slamming it with a single hand, carrying a motorbike with a driver on it with his two hands, removing the entire interiors of a car with just a pulling force and the saturation point reaches the point when the twin versions of John Abraham (along with their father's spirit) manage to stop a helicopter from flying by just pulling it with their brute strength. If the storyline and the dialogues were not less bizarre, it's the action sequences that leave you weary to the core. The cinematography is so mechanical that just to showcase good over evil, the sun rises on the screen and hola! it's daytime. The varied shortcomings in the technicalities of the movie do not help either.

Every action sequence, dialogue and the introductory scene has blaring and loud background music that acts as a huge misfit. Only the song 'Jan Gan Man' crooned by B Praak evokes some sentiments successfully while other songs struggle to create an impact. Needless to say, the Nora Fatehi starrer 'Kusu Kusu' had literally no context in the movie.

John Abraham's triple act in Satyameva Jayate 2 largely falls flat in the face in the name of patriotism and righteousness. However, the actor's loyal fan base may enjoy this one as a one-time watch.

We give Satyameva Jayate 2, a rating of 2 out of 5 stars.