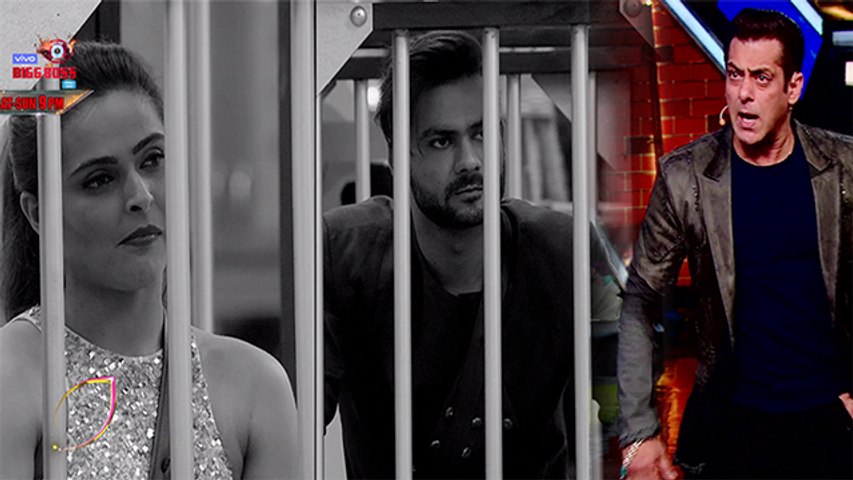 The past week saw the contestants go through an emotional turmoil. They met their family members who gave them some valuable insights about their game and also encouraged them. The contestants were yearning for their love after being locked inside the house for 100+ days and this reunion brought in a wave of rejuvenation inside the house. Given that all the contestants failed the last captaincy task, Bigg Boss gives them another chance to elect a captain through the task. He commands them to freeze whenever someone new enters the house. The first one to enter is Aarti's best friend and the handsome hunk, Karan Singh Grover. Aarti is not able to hold back her tears and hugs him. Karan tells Aarti that she is playing the game quite well and that she shouldn't change for anyone. He also tells her that Bipasha is extremely proud ofher for playing a dignified game. The next one to enter the house is Vindu Dara Singh. He asks Rashami to up her game and gets back in the race. The last person who enters the house is the former winner and Shehnaz's dream man Gautam Gulati. Shehnaz's happiness knows no bounds and when Bigg Boss releases her, she showers him with hugs and kisses. She gets extremely excited as her dream is fulfilled and they both break into a romantic dance.

Up next, Salman Khan comes on stage and is quite upset by the housemates' behavior this week. He says he is disappointed about how Vishal and Madhurima behaved with each other. He tells Madhurima that she got very violent which is not acceptable. He also said that their relationship is not healthy and the fight should not have escalated. Salman said that Vishal overreacted since throwing water on Madhurima was unnecessary. The host tells them that they can leave the house since their behavior is not reflecting well on the show.

Next, Salman moves on to Paras. He questions him on his relationship with Mahira. Salman tells him that their bond appears to be more than friendship. He also tells Paras that his girlfriend has a few questions about his equation with Mahira. He also says that Paras is playing a game that leaves the latter agitated. In the heat of the moment, Paras ends up disrespecting Salman and blames the host of misjudgment. This upsets Salman who reminds Paras to mind his tone and to speak to him with respect. Salman also says that after staying in the Bigg Boss house for 100 odds doesn't make him a star.