Anita Hassanandani and her husband Rohit Reddy had become parents to a baby boy on February 9, 2021. The couple had the most lovely way to announce the same on their social media handle. Now, Anita has shared a glimpse of their baby boy but with an adorable twist.

The picture shared by Anita Hassanandani has her and Rohit Reddy looking at their baby in an endearing manner as the tiny tot is cradled up in his mother's arms. However, Anita has covered the face of her baby boy with an emoji. It seems that the couple is yet to reveal the face of their son but their lovely pictures and videos ever since the birth of their child has surely got fans excited to see a glimpse of their son's face. Anita captioned the same stating, "And just like that, we were three! Blessed with the best. Thank you each one of you for your beautiful wishes." Take a look at the post shared by the Naagin actor.

Earlier Rohit Reddy had announced their welcoming their baby boy with a beautiful post. He shared one of Anita Hassanandani's pictures from her maternity photo shoot. The words, 'It's a boy' could be seen written in the background. He had also shared a video after the birth of their child wherein he and Anita can be presumably taking a glimpse of their child. The video had Anita telling how their baby boy shares his nose like his father. 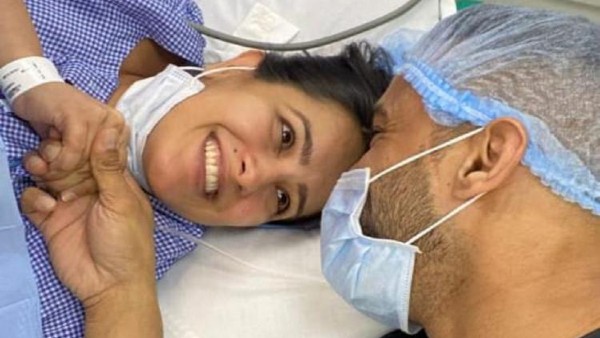 Also Read: Rohit Reddy Shares Unseen Video With Anita Hassanandani From The Hospital As They Welcome Their Baby

Apart from that, Anita Hassanandani's close friend and TV Czarina Ekta Kapoor had also shared her elated reaction to Anita becoming a mother. Ekta had shared a video right after Anita gave birth to her baby boy wherein the producer can be seen telling Anita to strike a pose. She furthermore congratulates Anita on this happy occasion and says how her nephew has been born. The couple were flooded with congratulatory messages on Anita's post from their industry friends. Some of them included Hina Khan, Karanvir Bohra, Bharti Singh, Nakuul Mehta, Surbhi Jyoti, Kishwer Merchant and Gautam Gulati. Apart from Anita and Rohit, TV actor Nakuul Mehta and his wife Jankee Parekh also welcomed a baby boy recently.